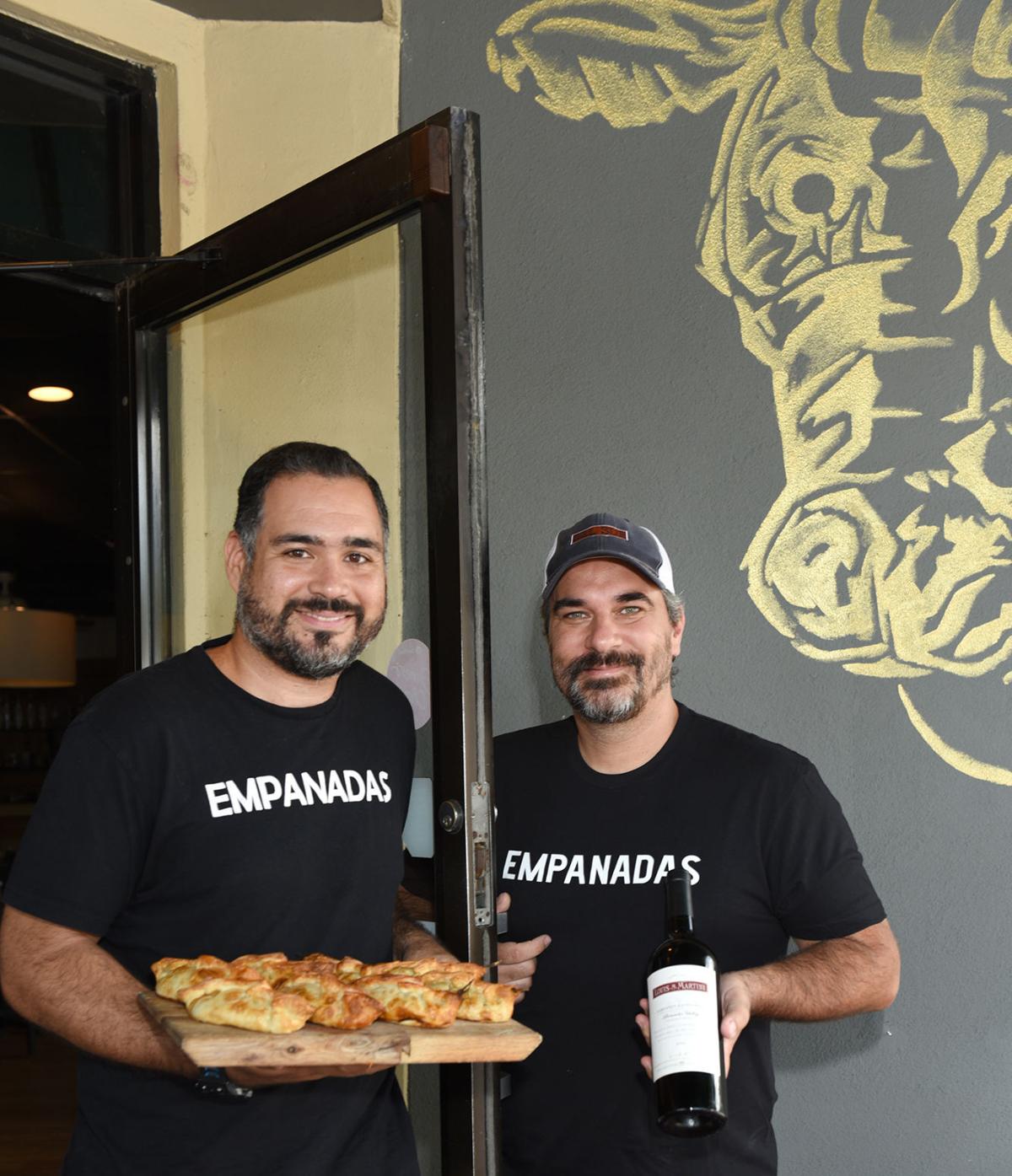 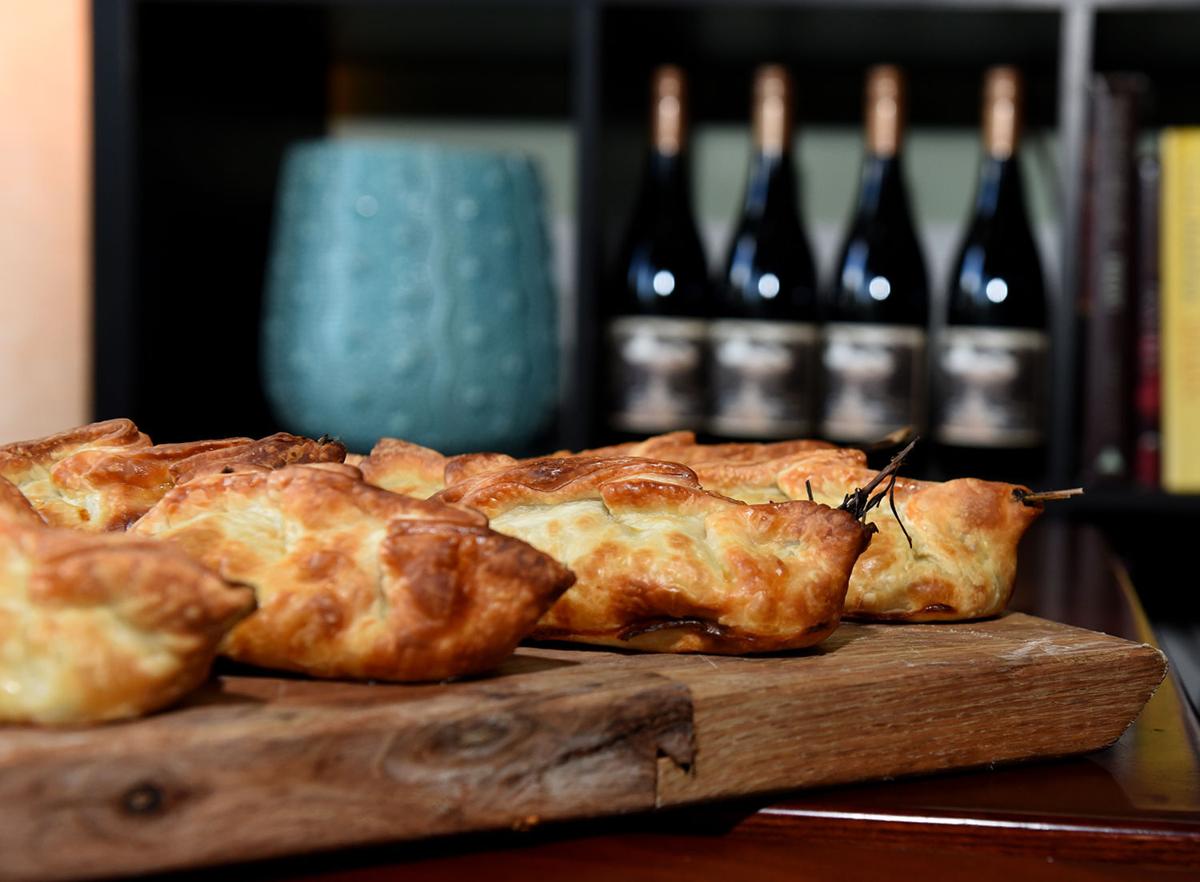 The finished beef empanadas from the recipe above are an island favorite anytime. 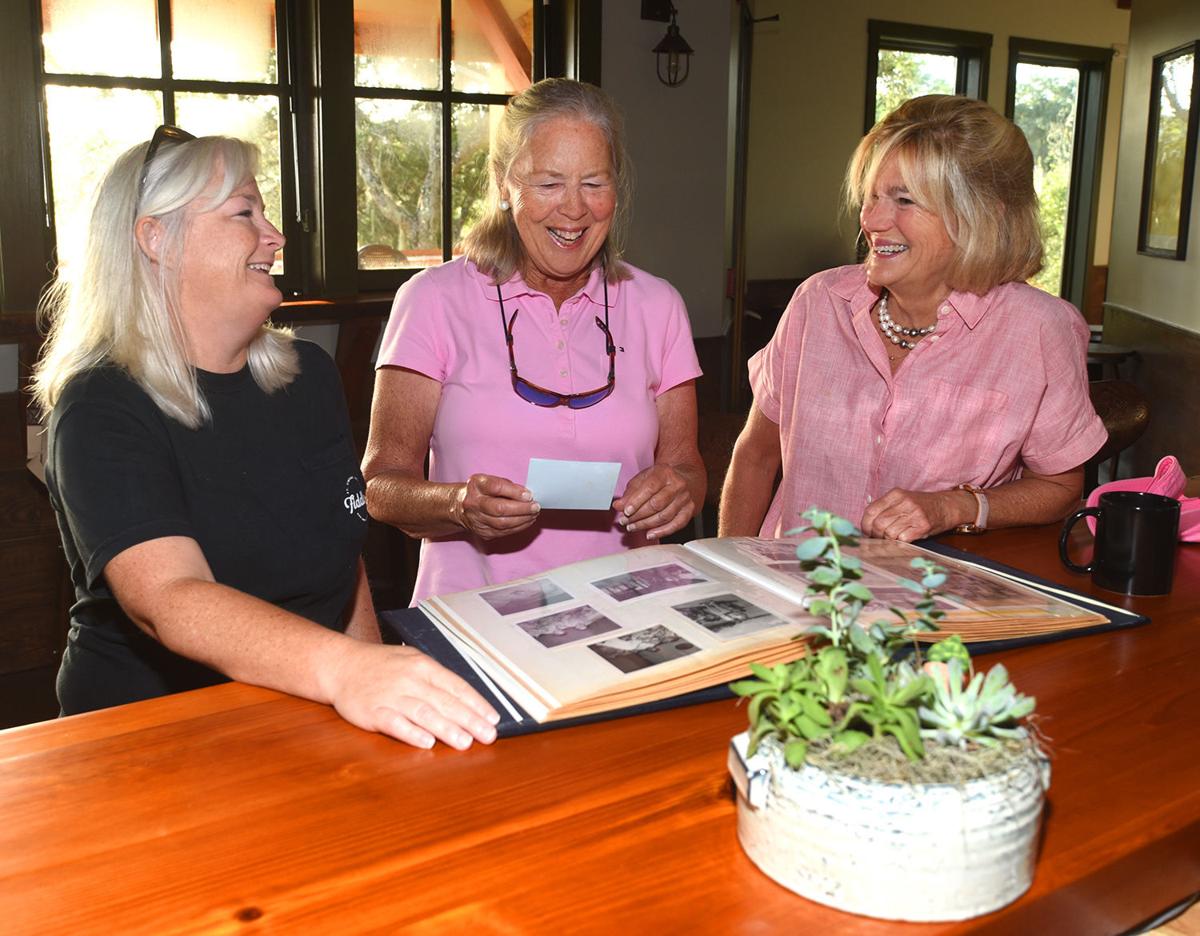 Williams family members Amy Baldwin, from left, EJ Williams and Lucy Thomas reminisce about how important cooking and fellowship with one another are in their family. 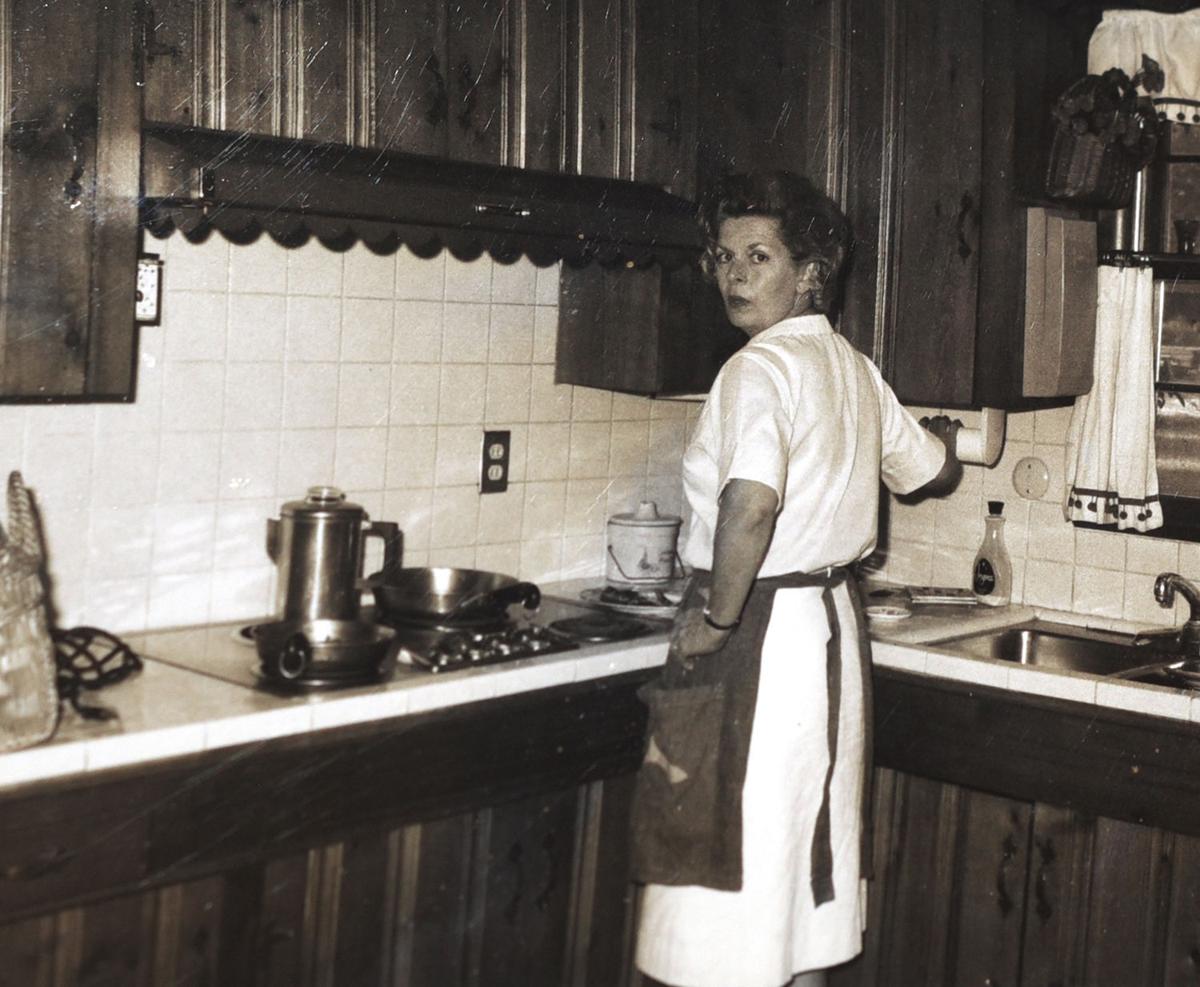 A photo snapped in 1959 captures the women’s mother and grandmother preparing for a family dinner. 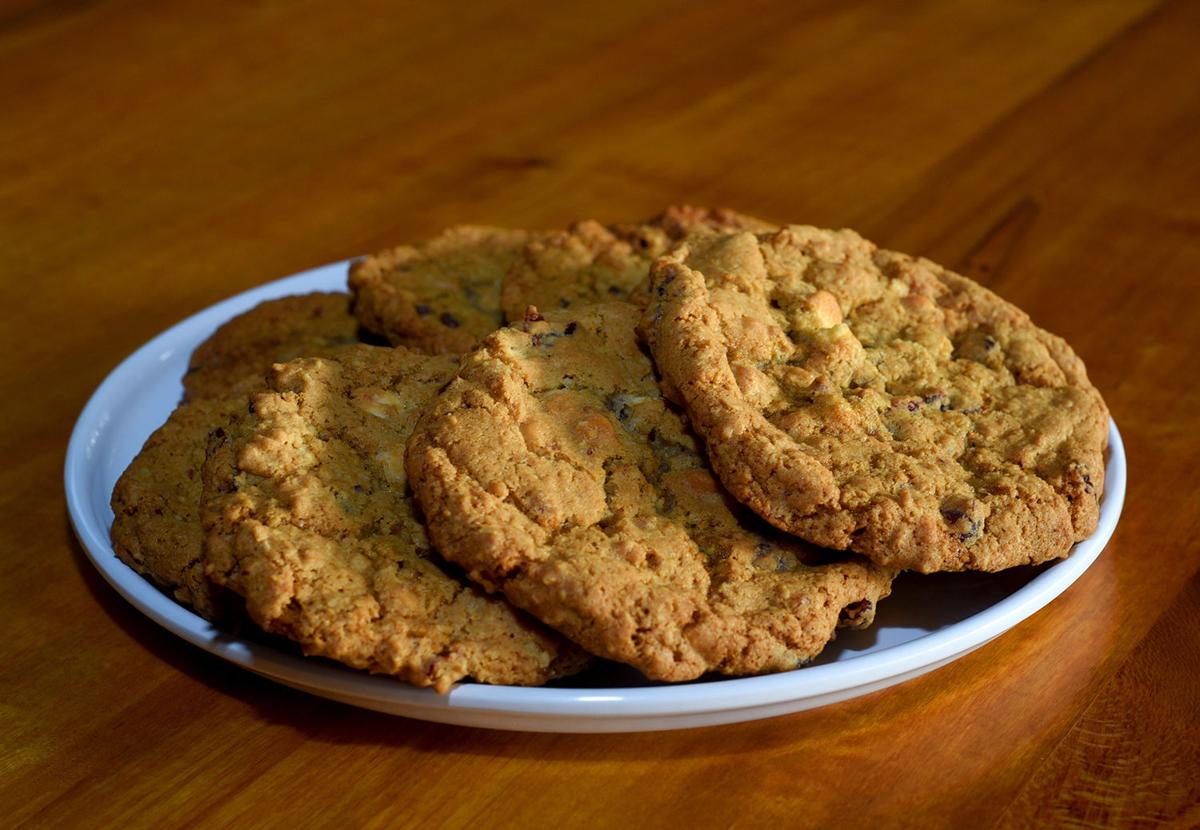 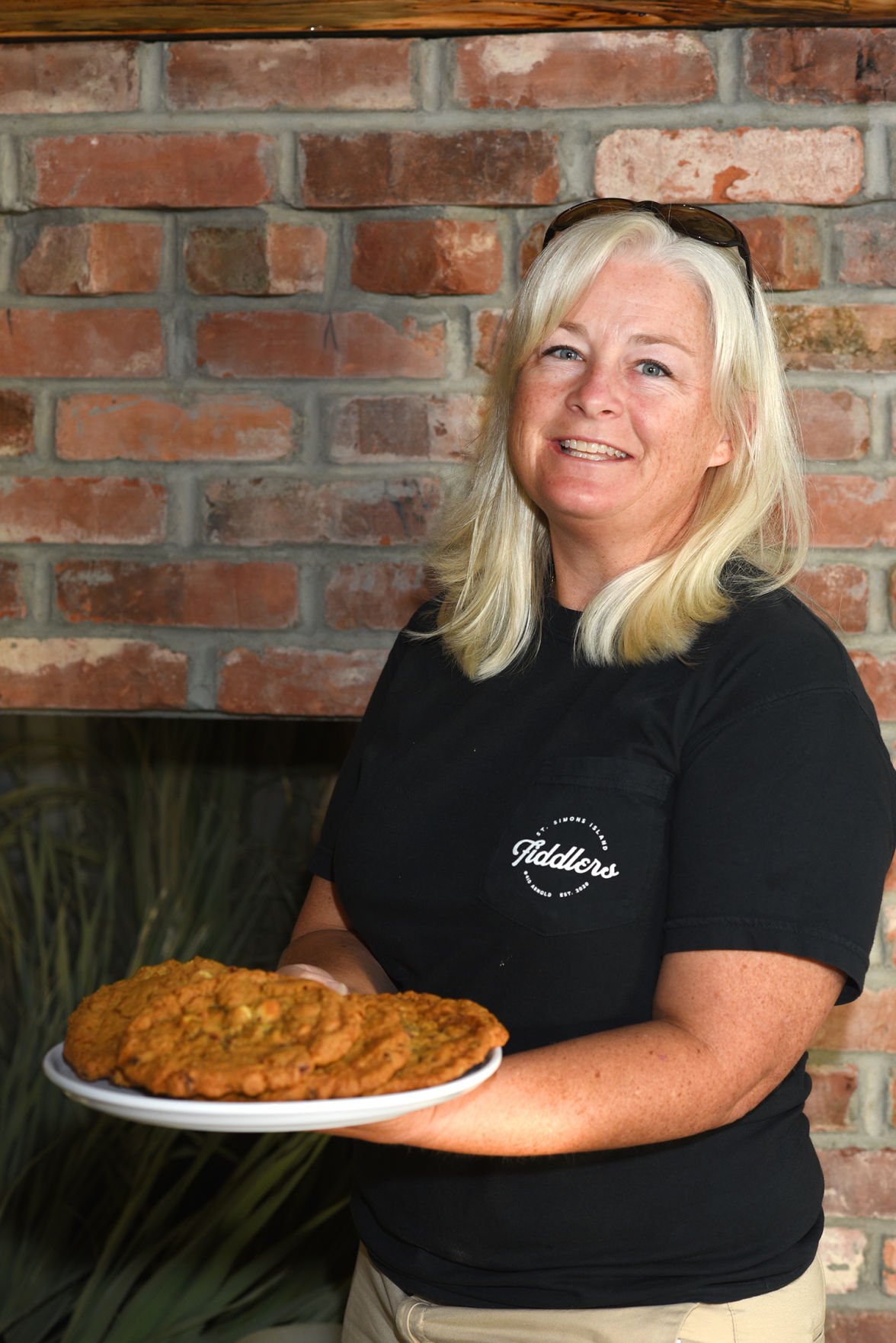 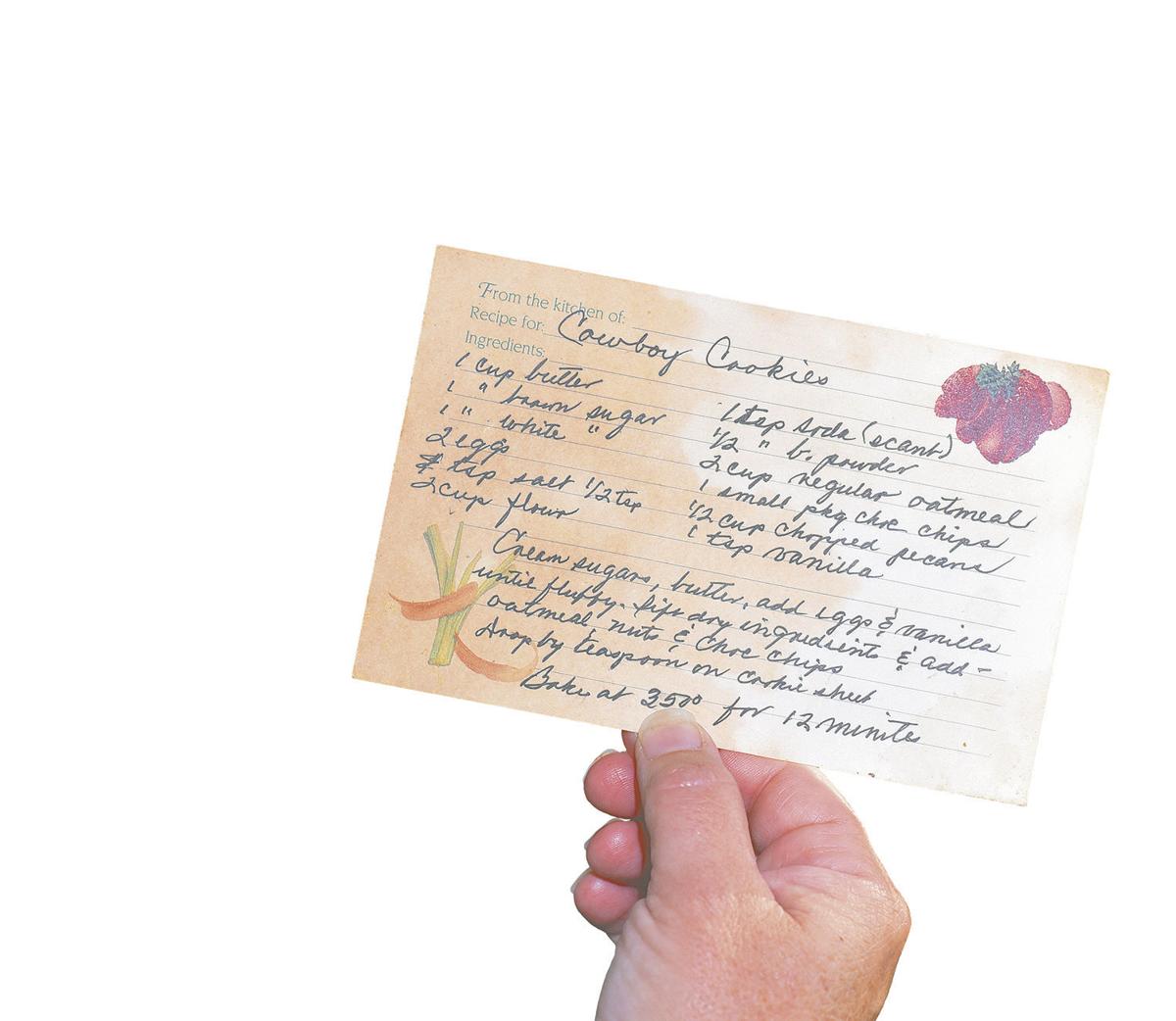 This well-worn, handwritten recipe for Cowboy Cookies, is a family heirloom.

The finished beef empanadas from the recipe above are an island favorite anytime.

Williams family members Amy Baldwin, from left, EJ Williams and Lucy Thomas reminisce about how important cooking and fellowship with one another are in their family.

A photo snapped in 1959 captures the women’s mother and grandmother preparing for a family dinner.

This well-worn, handwritten recipe for Cowboy Cookies, is a family heirloom.

I suspect this experience is practically universal. I knew precisely how my maternal grandmother’s house would smell on any given holiday. The aromas were always distinct. My maternal grandmother, known as “Grandma,” was a Midwesterner with New England roots. She was fond of traditional dishes, but also served items such as mashed turnips, rutabaga, rhubarb, and, because Grandpa like it, mince meat pie. My paternal grandmother, or “MaMa,” was a country Southerner through and through. Her side dishes included creamed corn, cooked-to-death green beans with ham and onions, collard greens and scratch biscuits.

I’m fortunate to have inherited many of their recipes. Those directions for time-honored dishes, passed down through generations, can trigger your emotions as much as the moment you catch a whiff an old family recipe that’s cooking on the stove or in the oven. We experience food through all five of our senses – touch, taste, smell, sound and sight – and I would argue that memory should be added as well. We recently spent some time with local restaurateurs talking about dishes they serve that have been handed down through their families.

At Del Sur Artisan Eats, on St. Simons Island, Chef Alberto Llano, a native of Colombia, oversees and creates an array of dishes from Europe and South America. His business partner, and co-owner, Hernan Stutzer, is a native of Argentina.

The melding of these cultures explains the diverse menu, which includes Italian dishes such as pasta, risotto and osso bucco, and Argentinian-style steak dishes, among others. But for many people, the star of the show is empanadas, a tasty pastry filled with meat, poultry or vegetables, and an array of other ingredients.

Empanadas originated in Spain, Chef Llano said, but every country that has been influenced by Spain has a version of them.

“At Del Sur, we serve authentic Argentinian style; they are baked and nice and flakey,” he said. “The reason these are very popular in Latin America is because they are inexpensive, hand-held and easy to find.”

More a street food, like tacos, than a fancy appetizer, empanadas have an ability to fit into nearly every occasion. But, Chef Llano said when he visits Argentina, he’ll go to a shop where they are sold, buy several, and continue with his day.

Del Sur serves hundreds of empanadas a week, all carefully prepared by Chef Carlos Murrillo, who painstakingly prepares the ingredients, stuffs the shells with the appropriate fillings and then crimps the pastries before baking them.

“At Del Sur, we have beef, chicken, spinach, lamb and pork, but they can be made of virtually anything,” said Chef Llano. “We do specials all the time, such as salmon, shrimp, pumpkin etc.”

When you have a craving for empanadas, don’t worry about what time of day it is. Just have them.

“Empanadas are that kind of food that you can eat at breakfast, lunch, dinner, appetizer, main course or dessert,” Chef Llano said. “We basically use them for all occasions.”

When serving empanadas as a main dish, salads are a very popular accompaniment.

Chef Llano said that as someone from Colombia, empanadas are in his blood.

“But the Argentinian empanadas, I learned with the best of the best,” he said. “Hernan’s mom, Cristina, was one of my empanada mentors … and the beef recipe belongs to her family.”

The other flavors, he said, where created as a team, and perfected by Chef Murrillo.

Once you’ve eaten a savory dish, like empanadas, the only answer is something sweet, perhaps like the cowboy cookies served at Fiddlers at 410 Arnold. Fiddlers is owned by the Williams family, and is a cousin to Crabdaddy’s and Skipper’s restaurants. In previous years, the family was also involved with island stalwarts Crab Trap and Sweet Mama’s.

We met with several family members recently, including E.J. Williams, Laura Williams, Amy Baldwin and Lucy Thomas, and talked about cooking and family, which are inextricably woven, especially in the South.

“Everybody cooked,” said EJ, adding that both her mother and father were excellent in the kitchen, as are her sisters and other family members.

“If you come to our house, and we’re having dinner, everybody’s in the kitchen; we like to eat,” she said. “Our family likes each other; we’re very lucky.”

“We just don’t want you to leave hungry,” said EJ.

Nearly every family has that one recipe that serves multiple purposes. For the Williams family, it’s cowboy cookies.

“They’re our go-to cookies for funerals, weddings, if someone is sick,” Amy said.

EJ figures the cowboy cookie recipe is most likely Amy’s great-grandmother’s, but that’s neither here nor there. She said what she’s learned in her years of cooking is that trial and error is the way to success in the kitchen. In explaining her philosophy, she also provides a couple of metaphors for life.

“You just can’t be afraid to start over,” she said. “Sometimes you do everything right and it doesn’t turn out; you just throw it out and start over.”

Directions: In a pot, combine the oil, onions, red peppers, garlic and bay leaves and cook until the onions are clear. Then add the brisket, potatoes, wine, beef base and allspice, and reduce until fully cooked. Turn off heat. When cold, add scallions.

Mix the flour and salt in a food processor, pulse in batches until well combined.

Add the egg yolks and the milk in small amounts, pulse until small dough clumps start to form.

Roll out dough and using a tortilla press, or a small plate, cut out discs.

Brush edges of the empanadas with egg white

Fold the empanada discs and seal and twist the edges gently with your fingers.

Lightly brush the top of the empanadas with egg yolk.

Let the empanadas rest in the fridge for about 30 minutes or until ready to bake.

Serve warm with the dipping sauce of your choice.

Recipe courtesy of Amy Baldwin, the Williams family and Fiddlers at 410 Arnold, on St. Simons Island.

Cream sugar and butter, add eggs and vanilla until fluffy; sift and add dry ingredients and add oatmeal, nuts and chocolate chops. Drop by teaspoon onto cookie sheet. Bake for 12 minutes in oven preheated to 350 degrees.