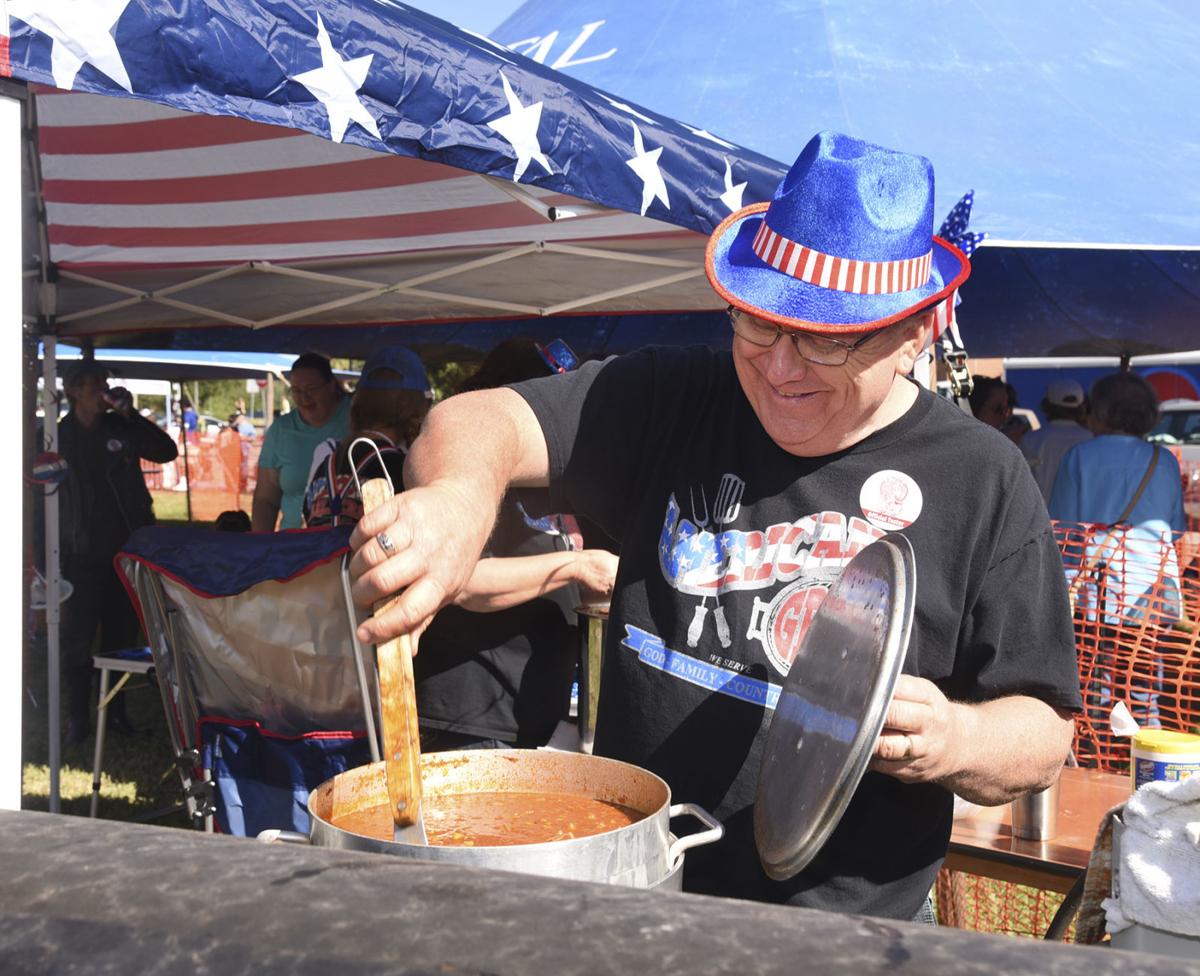 Dozens of stew chefs, both amateur and professional, will feature their recipes at the upcoming Brunswick Stewbilee. 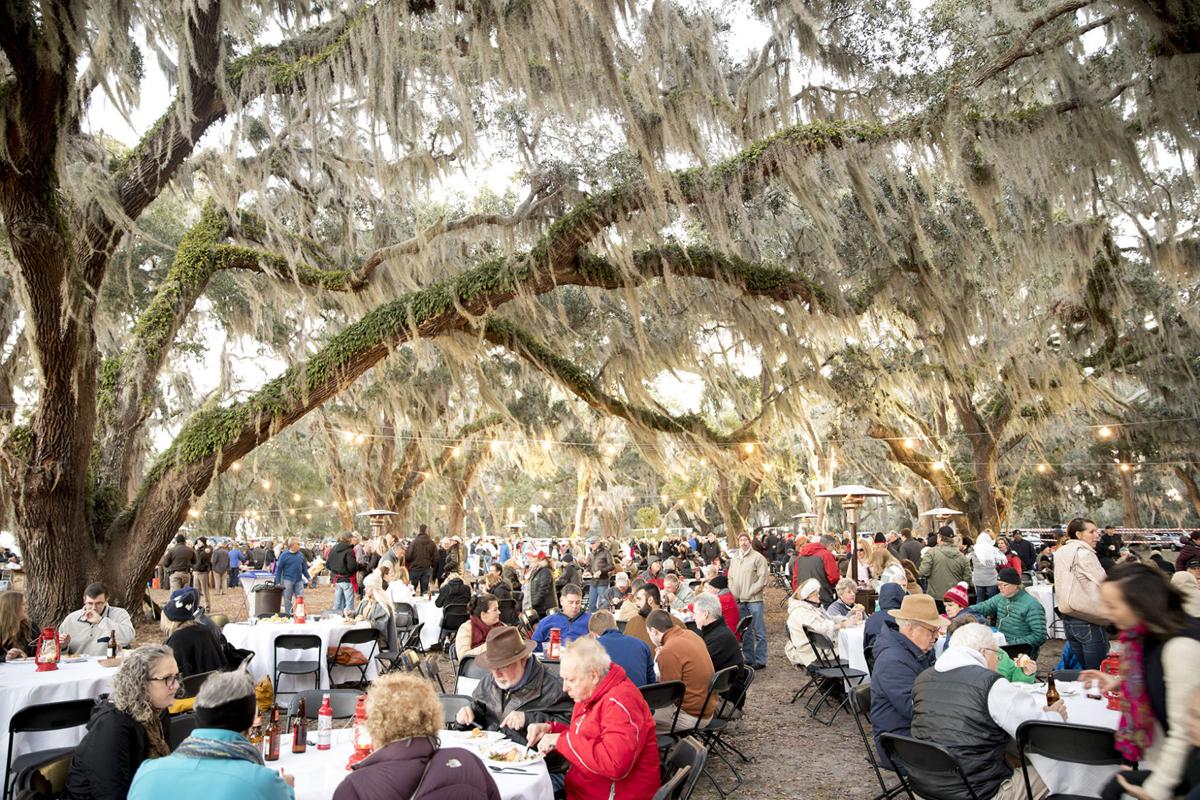 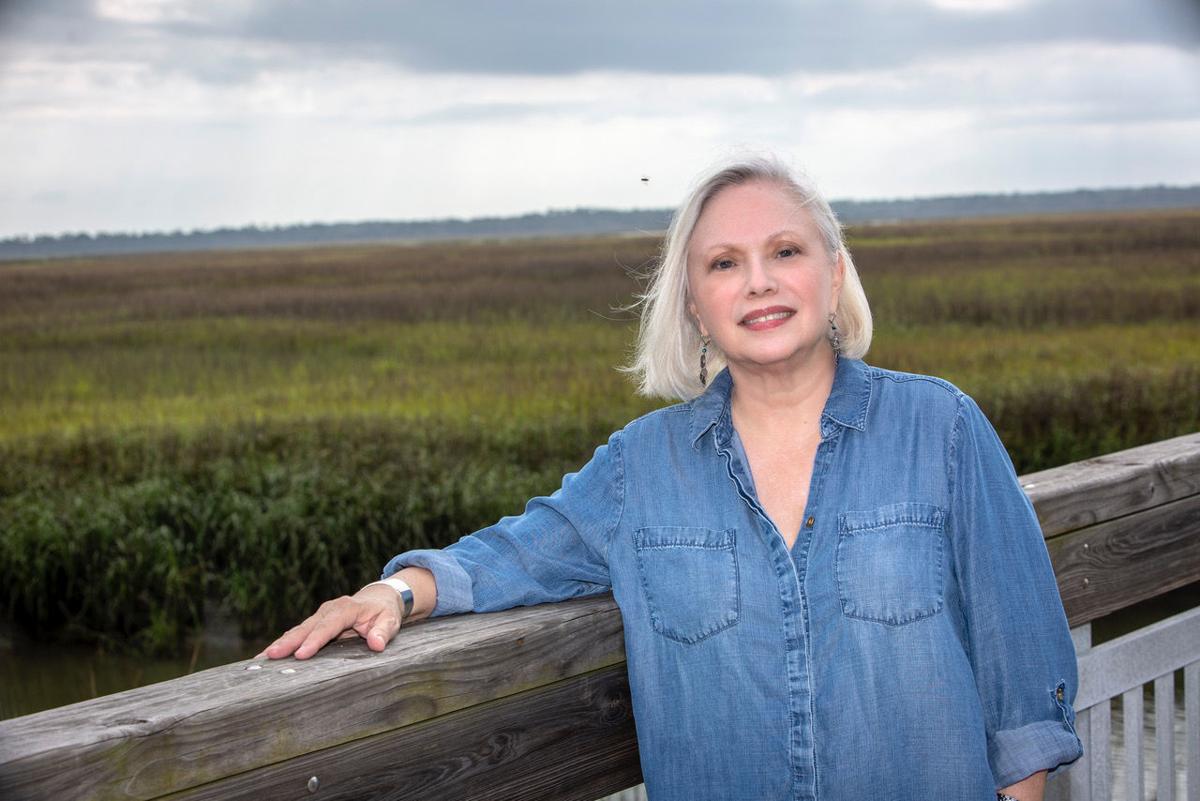 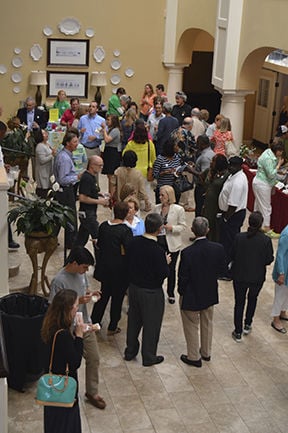 People assemble in the lobby of the King and Prince Beach & Golf Resort during a previous A Taste of Glynn. 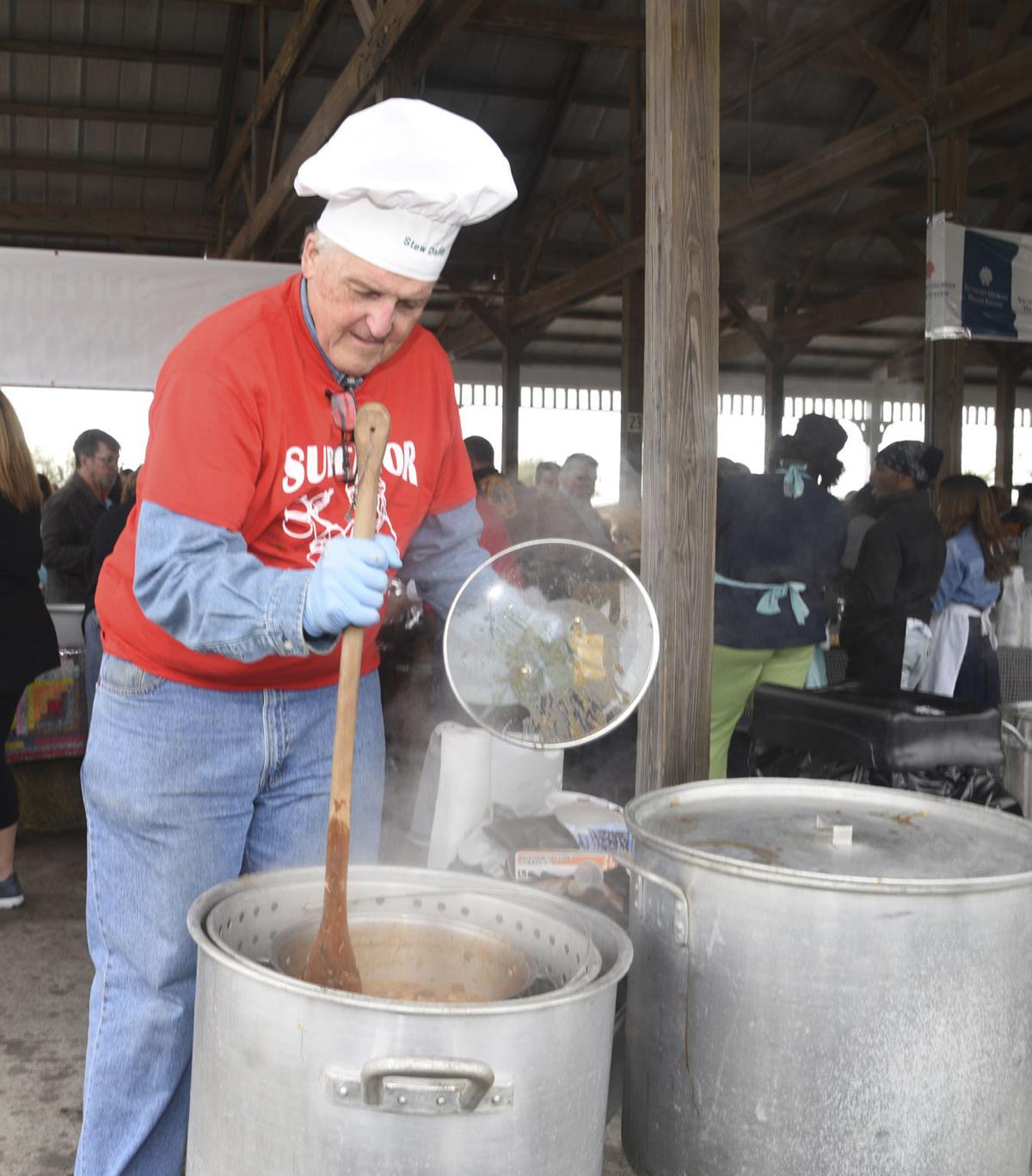 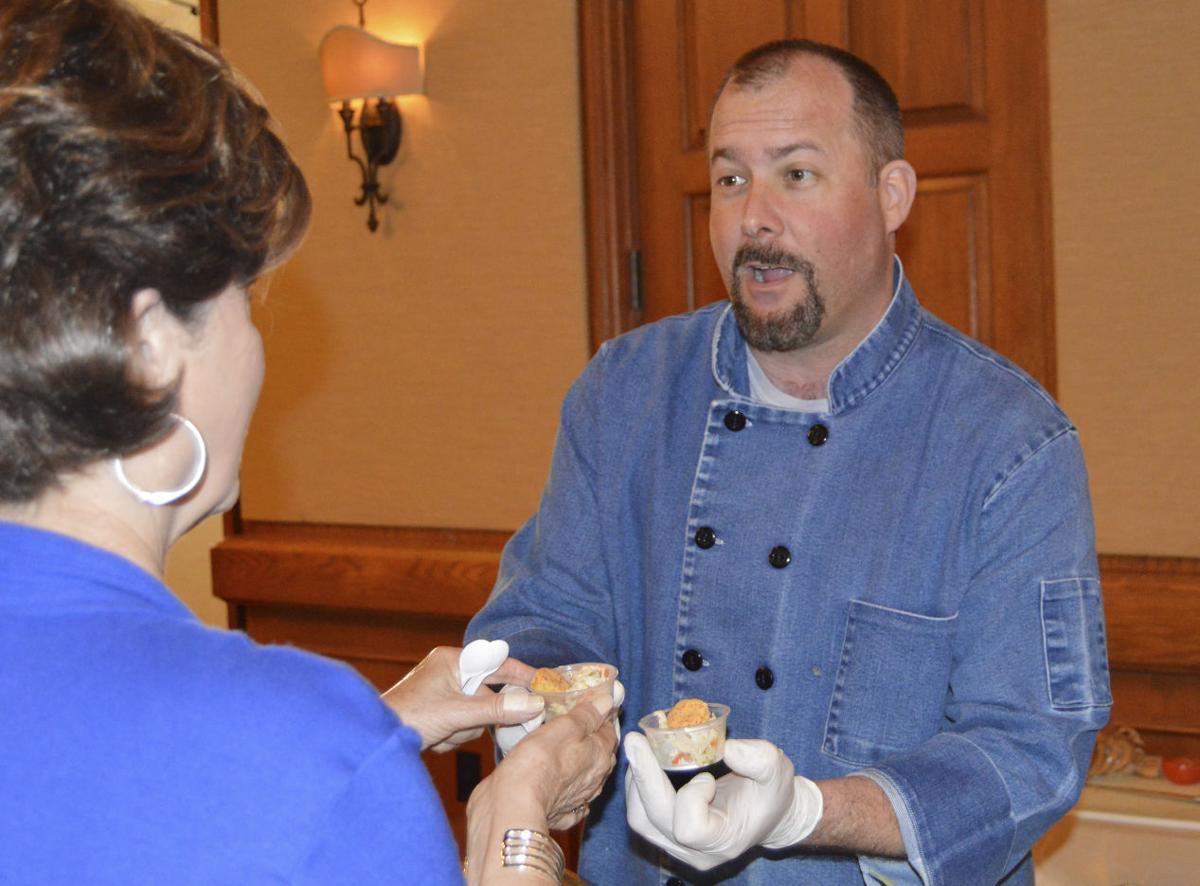 David Ouimet, owner of Purple Sage Catering and Bistro 1188, is pictured at a previous year’s A Taste of Glynn.

Dozens of stew chefs, both amateur and professional, will feature their recipes at the upcoming Brunswick Stewbilee.

People assemble in the lobby of the King and Prince Beach & Golf Resort during a previous A Taste of Glynn.

David Ouimet, owner of Purple Sage Catering and Bistro 1188, is pictured at a previous year’s A Taste of Glynn.

There is no doubt about it. Golden Islanders love food and supporting causes that help their neighbors and the community at large. Over the next few weeks, there will be ample opportunity for area residents to partake in some of the most delicious food this side of paradise, in addition to giving a hand to their neighbors. The three events, the St. Simons Land Trust Oyster Roast, A Taste of Glynn and the Brunswick Rockin’ Stewbilee, will be held Jan. 18, 19 and 25, respectively.

This long-time island favorite is celebrating its 20th anniversary this year, and in honor of that milestone, executive director Emily Ellison said the event is “going green’ as much as possible.

“This includes providing reusable stemless wine glasses and reusable stadium cups for beer and other beverages,” she said. “The cups, glasses and Koozies are all branded with the 20th anniversary St. Simons Land Trust logo; instead of throwing away lots of Styrofoam and paper materials, guests can take these home.”

Other green measures include having a keg trailer so guests can select beer on tap, resulting in no bottles being added to landfills.

“As we’ve done in previous years, we’re also recycling the used oyster shells, and they will be used in living shorelines along the coast,” Ellison said. “Another nod to the 20th anniversary will be a large screen onsite with the St. Simons Land Trust 20th anniversary timeline featuring lots of locals who have been involved in the event, and have supported the land trust for past two decades. And, … Michael Hulett is the featured entertainment.”

Ellison said that the event is bigger and better than ever, with more than 50 restaurants and vendors providing food for the buffet, which guests can enjoy in addition to the freshly roasted oysters.

Oysters, of course, are the main attraction, and serving all those delicious bivalves to hungry hordes takes a team of volunteers. Ellison said 16 people work with oyster cooking and serving, and they come from a corps of volunteers, and representatives from Crabdaddy’s, Bennie’s Red Barn and Sea Island Forge.

“Of course, we have more than 100 volunteers in total who work with us throughout the year in planning, soliciting support, setting up the day of, serving guests and helping with clean-up and recycling,” she explained. “The event would be impossible without so many who provide countless hours in making this an annual community event.”

Ellison said with it being the 20th anniversary of the land trust, people, businesses and agencies that have made land conservation on St. Simons Island possible will be highlighted throughout the year.

“One of our commitments is to ‘be on the land,’ meaning that we want to share the land trust properties that are open to the public with residents and visitors in meaningful ways,” she said. “We want to get more young families on land trust properties, enhance partnerships with local schools and provide more information to the community on the incredible amount of scientific research that goes on at Cannon’s Point Preserve.

“We are putting an increased emphasis on education and outreach, engaging younger generations, and authentically thanking the hundreds and hundreds of generous supporters who are our partners in land conservation.”

A Taste of Glynn is also celebrating its 20th anniversary. The event, which is usually held in the spring, made the jump to January this year. Benefitting the Glynn Community Crisis Center, A Taste of Glynn will be held at the King and Prince Beach & Golf Resort, on St. Simons Island, and will feature an array of the area’s most talented chefs and their signature dishes. The large-scale event, which attracts nearly 1,000 people annually, will put the food at the forefront in the traditional competition for judges’ and people’s choice awards. Categories will include International, Coastal Flair, Comfort, Dessert and Tablescape.

One longtime participant, David Ouimet, owner of Purple Sage Catering and Bistro 1188, both in Brunswick, said the decision to participate is an easy one.

While not giving up any secrets in advance of the event, he did say this year’s entry will be “coastal inspired.” He also wouldn’t commit to whether or not he would be bringing his famous banana pudding.

“We will have to wait and see what surprises are in store,” he laughed.

Entertainment for the evening will be provided by well-known area musicians Michael Hulett, Bill Lukitsch and Monique Cothern. A silent auction will also be held and it will include prizes such as local art, home décor items, gift baskets, fine jewelry, massages and wine baskets. Donations include a cooking class for six in The Cloister kitchen on Sea Island, dolphin tours, golf for four at Sea Palms and a bicycle from Monkey Wrench.

For the past 36 years, community support has enabled Glynn Community Crisis Center to operate a 24-hour Crisis Hotline, and provide safe shelter and advocacy for Amity House residents and their children, transitional housing and outreach services and advocacy to non-sheltered clients, in addition to a long list of community outreach programs, such as Safe Dates and free support groups.

“A Taste of Glynn is our primary fundraiser for the year,” explained Dottie Bromley, executive director of the Glynn Community Crisis Center. “The proceeds pay for costs not covered by grants, as well as provide matching dollars as required by our funders. These dollars make a difference and are critical to maintaining programming and safe shelter for survivors as they build life anew free from abuse and fear.”

Breakout: A Taste of Glynn will be held from 5-8 p.m. Jan. 19 at the King and Prince Beach & Golf Resort, 201 Arnold Road, St. Simons Island. The event will feature the area’s most talented chefs and caterers showcasing their art, a silent auction and live music. Proceeds benefit Glynn Community Crisis Center, Amity House, Hope House and outreach. Tickets are $45 in advance and $60 at the door. Details: 912-264-1348.

Stewbilee has been through various changes over its past 20 years – the event began as a small-scale affair involving a Brunswick stew tasting contest. Over the years it grew, with additional attractions, such as a classic car show, pooch parade and 5K road race becoming part of the event. At one point, big name entertainers such as Aaron Neville, Blues Traveler and The B-52s and others were adding Stewbilee to their tour stops. Then, the economy plummeted, sponsors tightened their belt and event went under the knife. It also started as a fall event, but following a hurricane-caused cancellation a couple of years ago, the festival was moved to January.

For the past several years, Stewbilee, which will be held from 9 a.m. to 2 p.m. Jan. 25 in Mary Ross Waterfront Park, in Brunswick, has included a motorcycle ride, live music, a pooch parade, a classic and antique car show, vendors and kids’ activities, in addition to the reason it all began — the stew tasting competition. There are no more headliner-type musical acts, but local bands now take the stage overlooking the park, with the Brunswick waterfront as the backdrop. This year’s performers are WharfRatz and Idle Hands.

Glynn County Superior Court Clerk Ron Adams has been involved with Stewbilee from the get-go, and although no longer on the committee, he still participates by entering his famous stew into the lineup.

It all began when the Brunswick Kiwanis Club wanted to do a fundraiser and, after a while, decided a food event would be a good idea. They were novices, so Adams began researching food festivals.

“I called Southern Living and spoke to someone in their travel section,” he said. “I asked them what was the most popular cooking event in the Southeast, and they suggested a chili cook-off in Winston-Salem, N.C.”

He soon traveled to Winston-Salem to learn from their chili committee, and brought back a lot of good advice.

“The key thing is to make sure you have media partners to make these work,” he said.

That first year, 20 teams raised $4,000 for the Boys and Girls Clubs of Southeast Georgia. The event was underwritten by Georgia-Pacific, the Southeast Georgia Health System and The Brunswick News, among others.

In comparison, Teeple Hill, this year’s Stewbilee chair said that although the Boys and Girls Clubs of Southeast Georgia are still the primary beneficiary of the event, Kiwanis also makes contributions to 14 other charities that help children. He said sign-ups to participate in the stew cook-off have been brisk, and estimates there will be 25 teams when all totaled. The majority of those teams are local, with a few coming from Savannah and Atlanta. There are three divisions — restaurant, private individuals and nonprofits, and each category has about one-third of the contestants.

Vance Leavy, publisher of Bulldog Illustrated, was also an early arrival to Stewbilee, and when Adams and he learned the health system was trying to put on a concert, Leavy had the idea to merge the music with Stewbilee, Adams said.

“Vance is quite the organizer,” he said. “He was a real force in growing it.”

Unfortunately, the big-name concerts weren’t big sellers, and then the recession hit and the dollars dried up.

“We never were really able to create the synergy,” Adams said.

It wasn’t for lack of trying. The organizing committee received a grant from the state to hire a filmmaker to make a documentary titled, “Brunswick Stew: Georgia Named Her, Georgia Claimed Her,” and Georgia Traveler, a travel series on Georgia Public Television, covered Stewbilee on one of its segments. Even local legislators got involved. Former members of the Georgia General Assembly, Virginia Ramsey and Willou Smith, got a resolution passed by the General Assembly proclaiming that Georgia is home to the original Brunswick stew.

Breakout: Brunswick Rockin’ Stewbilee will be from 9 a.m. to 2 p.m. Jan. 25 at Mary Ross Waterfront Park, in Brunswick. Advance tickets are available at Troy University, Brunswick-Golden Isles Chamber of Commerce, Southeast Georgia Health System, Ritz Theatre, The Brunswick News, Elizabeth F. Correll Teen Center and Ameris Bank, all in Brunswick; Boys and Girls Club of Southeast Georgia, Golden Isles Convention and Visitors Bureau and Ameris Bank, all on St. Simons Island, and Ameris Bank, on Jekyll Island. Advance tickets are $8 for adults and $4 for children, and $10 for adults and $5 for children at the gate.