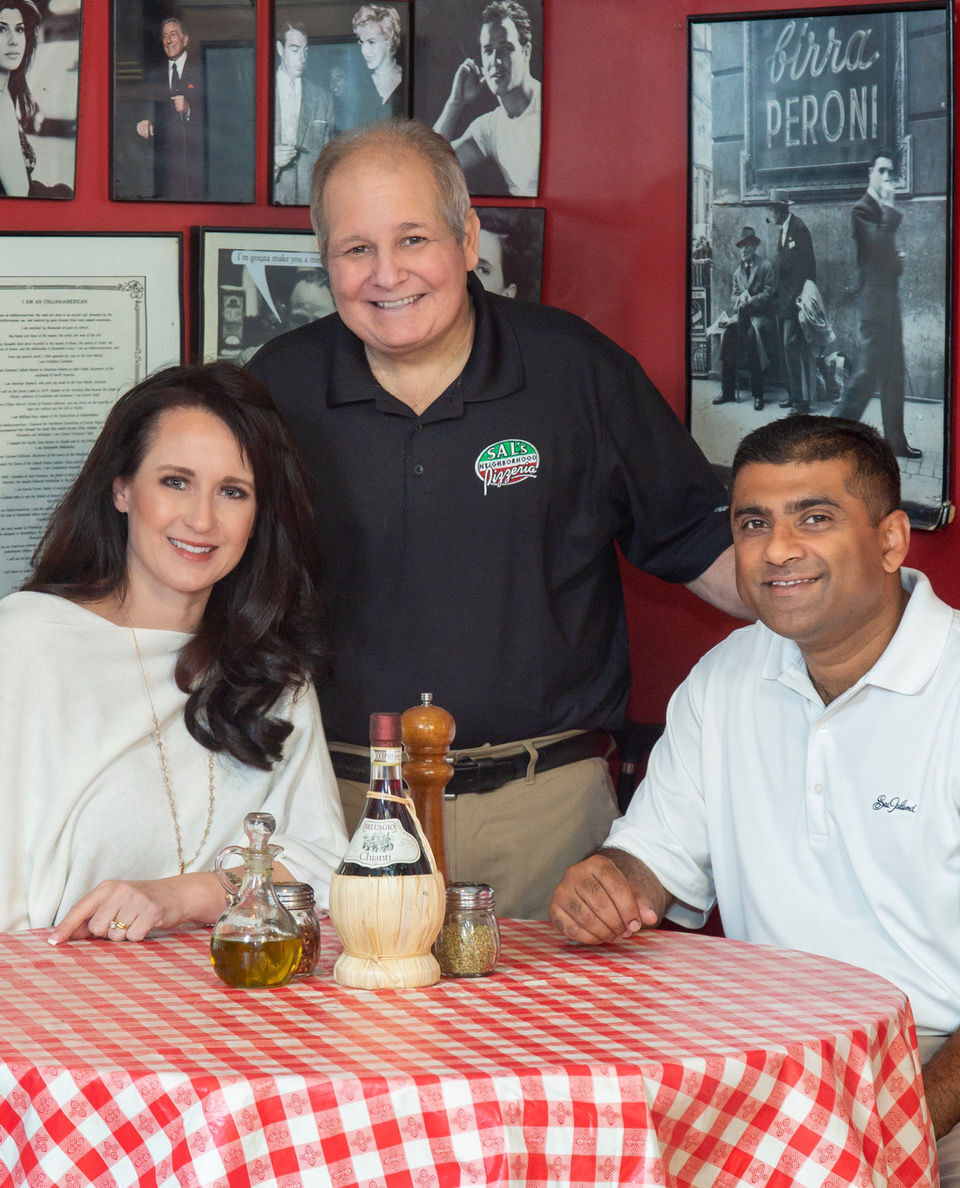 (From the cover) Sal Cenicola, center, is pictured with the husband-and-wife team of Holly and Ameet Shetty, current owners of Sal’s Neighborhood Pizzeria. 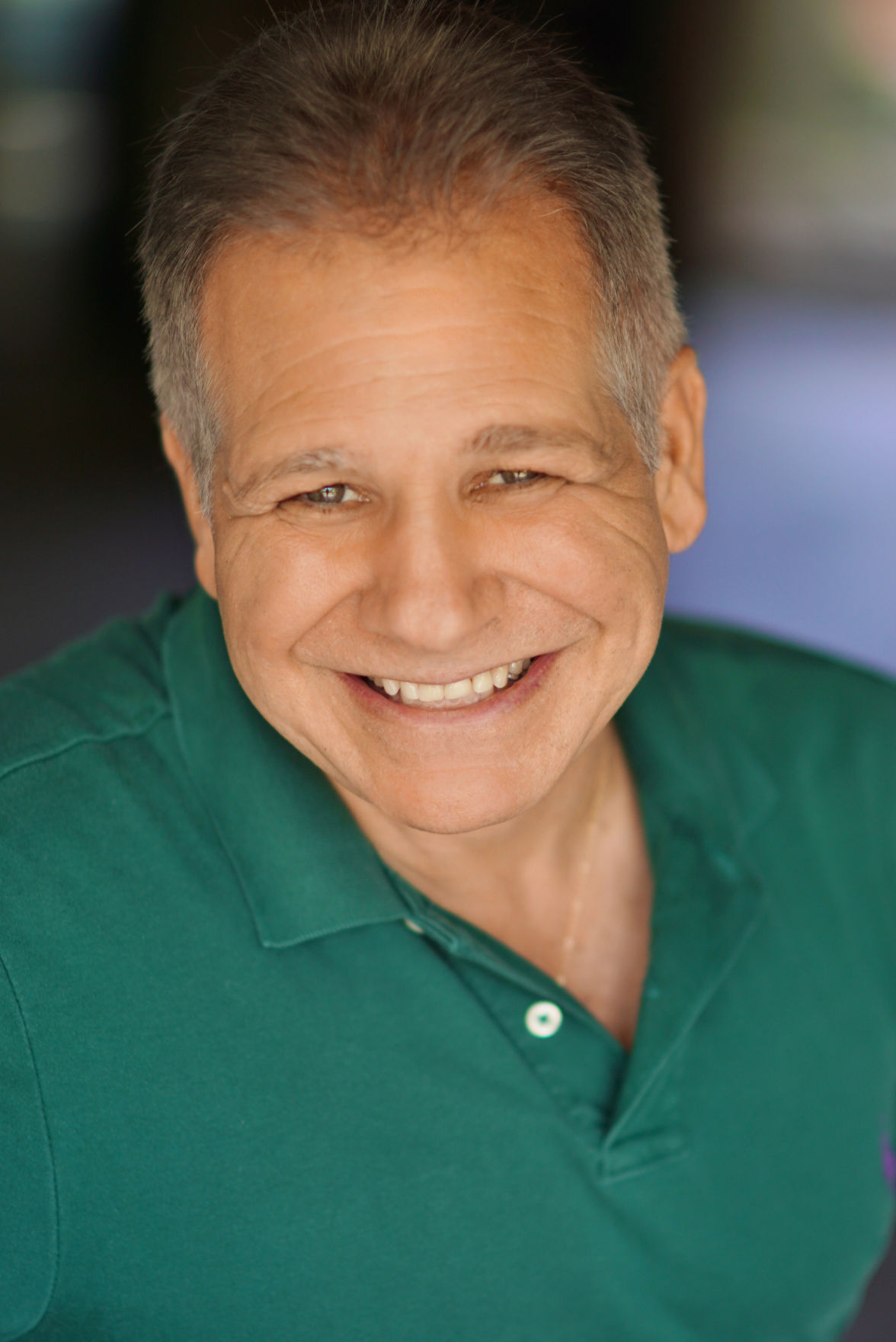 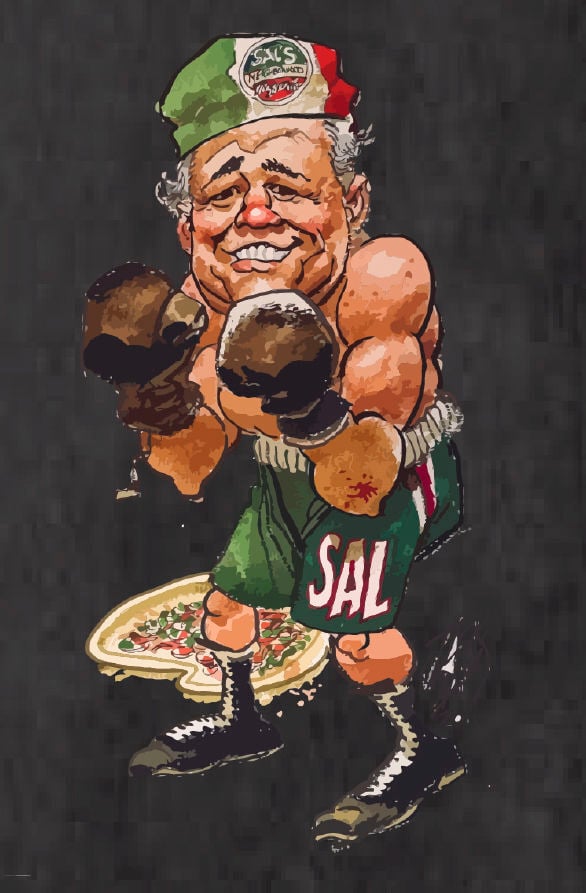 The legendary Jack Davis illustrated this caricature of Sal Cenicola. 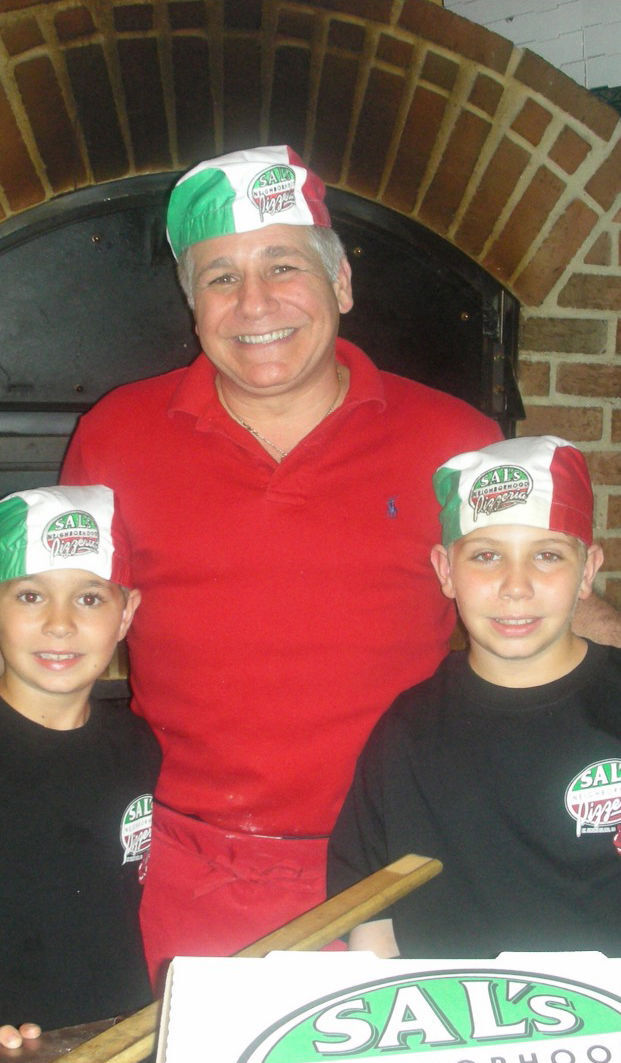 Sal is pictured with his sons, Nicholas and Salvatore Jr. 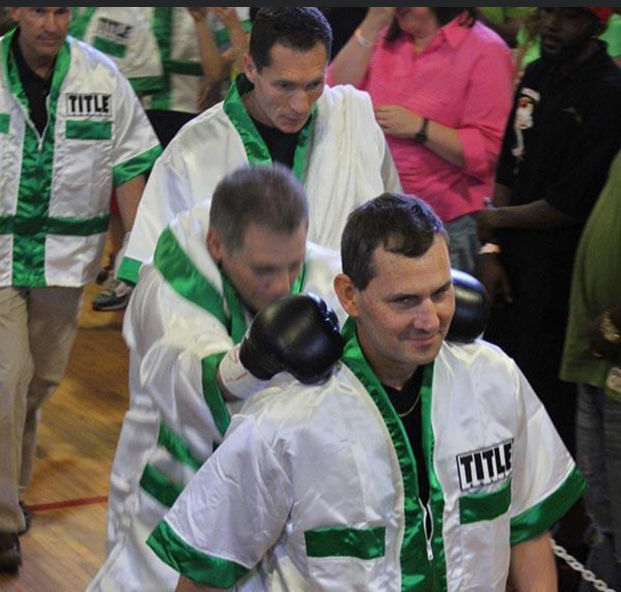 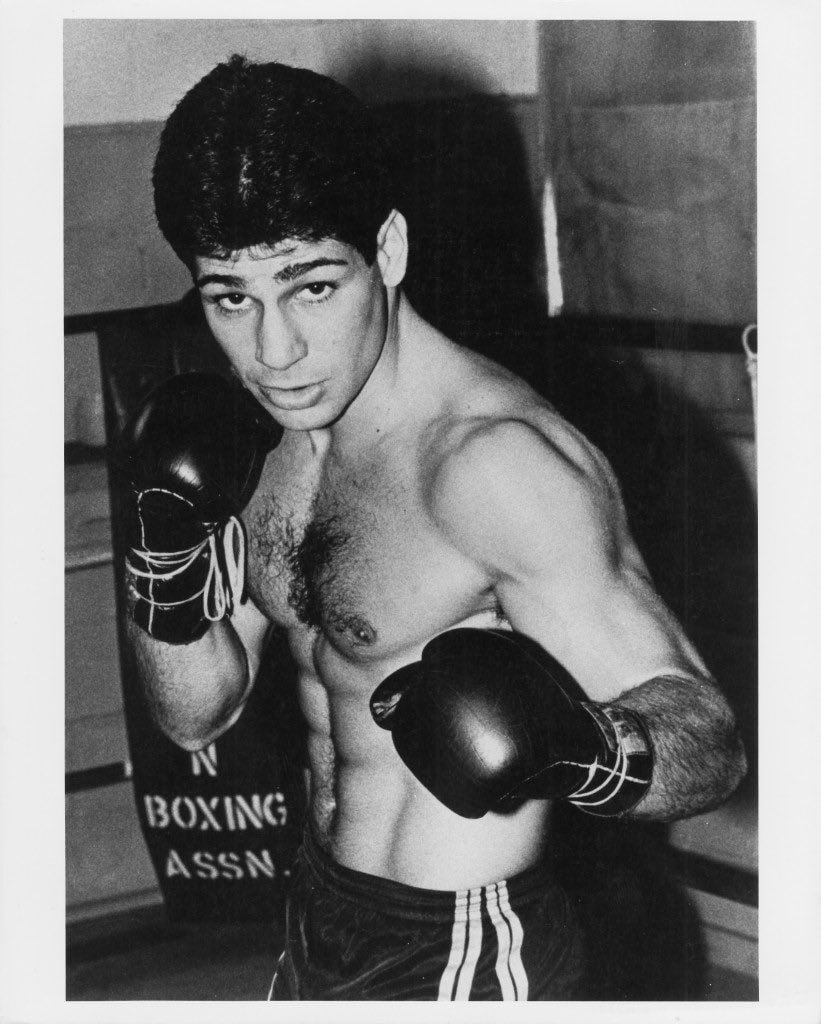 (From the cover) Sal Cenicola, center, is pictured with the husband-and-wife team of Holly and Ameet Shetty, current owners of Sal’s Neighborhood Pizzeria.

The legendary Jack Davis illustrated this caricature of Sal Cenicola.

Sal is pictured with his sons, Nicholas and Salvatore Jr.

It wasn’t so very long ago that one could drop by Sal’s Pizzeria on St. Simons Island and find owner Sal Cenicola center stage, so to speak, twirling dough and singing “That’s Amore” to his guests. The perpetual entertainer, athlete, family guy and entrepreneur unfortunately lost his battle with multiple health challenges in August. His memory, however, will be forever.

The son of Italian immigrants and a New Jersey native, Sal was a former professional boxer who earned the nickname “Rocky” from none other than boxing-great Rocky Graziano himself. He hung up his gloves almost 30 years ago, and began a career as a financial adviser. But in 2013, he returned to the ring at a match in Fernandina Beach, Florida, and emerged victorious against Nathan Petty. By all accounts his return to the ring after an absence of 25 years set a record for the longest layoff from boxing. His career ended after the bout in Fernandina with a record of 19-2.

When the family moved from New Jersey to Georgia, they had to adjust to their new lives, said Lisa Cenicola, Sal’s former wife, with whom he remained close. One thing they missed was gathering with their large extended family for weekend meals.

“Growing up in an Italian family, everything was based around food, especially Sundays. All the relatives would come over and the meal prep started early in the morning.

In fact, in a previous article in The Brunswick News, Sal himself, raised in a pizzeria by first-generation Italians, confirmed her statement.

“ … as Italians, we’ve always celebrated our romance with food.

Those Sundays, filled with poker games and the men of the family arguing over who made the better meatballs and sauce, also involved Sal’s dad heading into New York to buy several loaves of Italian bread.

“When we moved to St. Simons, we were in culture shock. It was confusing to have no Italian deli or bakery and no pizzeria around every corner. What was this thing called grits? Where were we?

The Cenicolas loved preparing and eating Italian food, and wanted a place to recreate the flavors of their childhoods. They saw a niche, took the plunge and opened Sal’s.

“Sal could do the pizza and I could make the Italian food, just like we do at home, only on a bigger scale, she explained. “We must have lost our minds, because this was a long shot.”

The couple began experimenting at home with doughs and sauces on the weekends at their house, and inviting neighbors over for sampling and feedback. That went on for a year, until a recipe was found.

“We then found the location, and off we went,” she said. “From the day we opened our doors, thank God it was successful.”

This pizzeria, Lisa said, is where Sal thrived, because it combined food and entertainment.

“Family was everything to him. His mother was one of 13 and so was his dad, so you can imagine all the relatives he has, and they were all close. He loved being a father, and having his kids involved in the restaurant.

During their off times, Sal loved to take his two sons fishing and crabbing, and teaching them how to to cook.

“If you were his friend, there was nothing he wouldn’t do for you; anything he put his mind to he put in 110 percent,” she said.

A little more than a year ago, it became clear that the Cenicolas would sell the restaurant. Holly and Ameet Shetty bought Sal’s in May 2020.

“The staff and I were sad to have to say goodbye to a man who impacted and touched so many lives. We will miss Sal, but his legacy will live on in the restaurant and with his two sons.

The Shettys did have a brief window of time in which to get to know Sal.

“(We heard) firsthand from him, close friends, family and the many repeat and loyal customers of just how much he poured his heart and soul into the restaurant,” Holly said. “We have listened to stories of the good old days, and were constantly reminded of how Sal impacted them or cared by going the extra mile for the community when called upon.”

Holly said she and her husband are proud to continue on the tradition of Sal’s.

“For so many reasons, we feel blessed and proud to be able to preserve and continue his legacy with Sal’s Neighborhood Pizzeria. He will forever live on in our hearts and will be missed deeply by all who knew him.

Sal most definitely felt at home in the ring and the restaurant, but one of his very favorite places was the stage. Sal had become active in community theatre, and had hired an acting coach before his diagnosis.

In a previous article about his acting, Sal had this to say about an upcoming performance with The Island Players.

“I’ve always loved entertaining. It’s fun to practice and we have a really great troupe here.

Gail Butler, who owns Taylor House Interiors but also is involved in local theatre, directed Sal in “Showstoppers,” which was presented by The Brunswick Actors’ Theatre, in Brunswick.

“He sang and danced through the entire production. He took his stage acting as seriously as he did his boxing. He wanted to be the best he could be. He loved every minute of it. You could see it on his face when he would perform. The women in the audience loved him as well. –Gail Butler

Anthony Paderewski, a location scout for NBC’s “The Girl from Plainville” and Savannah Location Services, had a several-years-long friendship with Sal.

“I met Sal a few years back, as he found me to take headshots and then started training with me as an acting coach. I helped him fine-tune his skills on camera. (I) also helped him find talent agency representation and taping his auditions, along with coaching. I helped him navigate the ins-and-outs of the film and TV industry.

Paderewski said Sal was committed to his acting craft and was always pursuing new knowledge to become the best actor he could be.

“Sal was one of the most determined actors and human beings I’ve ever encountered,” Anthony said. “His energy was (that) of an actor in their 20s, with a drive to match.”

movie, and appearing as a gangster who gets “whacked” in “Live By Night,” a movie that filmed in Brunswick and starred Ben Affleck.

In 2008, an article in The Brunswick News previewed the opening of Sal’s Neighborhood Pizzeria, and Sal’s energy and enthusiasm not only leaps off the page, but summarizes his approach to life.

“I was a boxer for 18 years, and I’m always looking for competition. I like to have my back against the wall and to come out swinging. I don’t want to have it easy. I want to have to fight and work to make it happen. –Sal Cenicola

And you certainly did.

Those who visit Sal’s Neighborhood Pizzeria, on St. Simons Island, are immediately charmed by its Old World ambience. Tucked away in a small enclave of shops and bistros, Sal’s is a popular choice for couples, families and friends.

Truth be told, my favorite thing to eat at Sal’s is the cannoli - fried pastry dough filled with a ricotta cheese-based cream filling. It is hard to find cannoli this far south of the Mason-Dixon, and Sal’s doesn’t disappoint. First though, I must have the Margherita pizza. Its red (tomatoes), white (mozzarella) and green (basil) represent the Italian flag and combine for a melange of bright, fresh flavors that satisfy at any hour. Wine to pair? Prosecco. —Mary Starr

Everyone has their favorites at Sal’s. Gail Butler, who directed Sal in “Showstoppers for The Brunswick Actors’ Theatre” and formed a friendship with him rooted in community theatre, has a top choice at Sal’s for sure. “The lasagna and a Caesar salad,” she said. The traditional lasagna is full of meat, cheese and pasta, and the Caesar salad has a traditional flavor profile and is made with fresh Romaine lettuce, baked croutons, kalamata olives and finished with a Caesar dressing. Lisa Cenicola, Sal’s former wife and the former co-owner of the pizzeria, said her favorite pizza is The Marshal. Named in honor of the Federal Law Enforcement Training Center, in Brunswick, this white sauced pizza is topped with garlic butter, olive oil, ricotta cheese, mushrooms and onions and finished with Margherita seasons and an olive oil drizzle. Holly Shetty, who, along with her husband Ameet Shetty, is the current owner, chose the eggplant parmigiana as her favorite. This classic dish is made from layers of eggplant baked with tomato sauce, fresh mozzarella and ricotta cheese. She also picked the popular Caesar salad as her accompaniment.