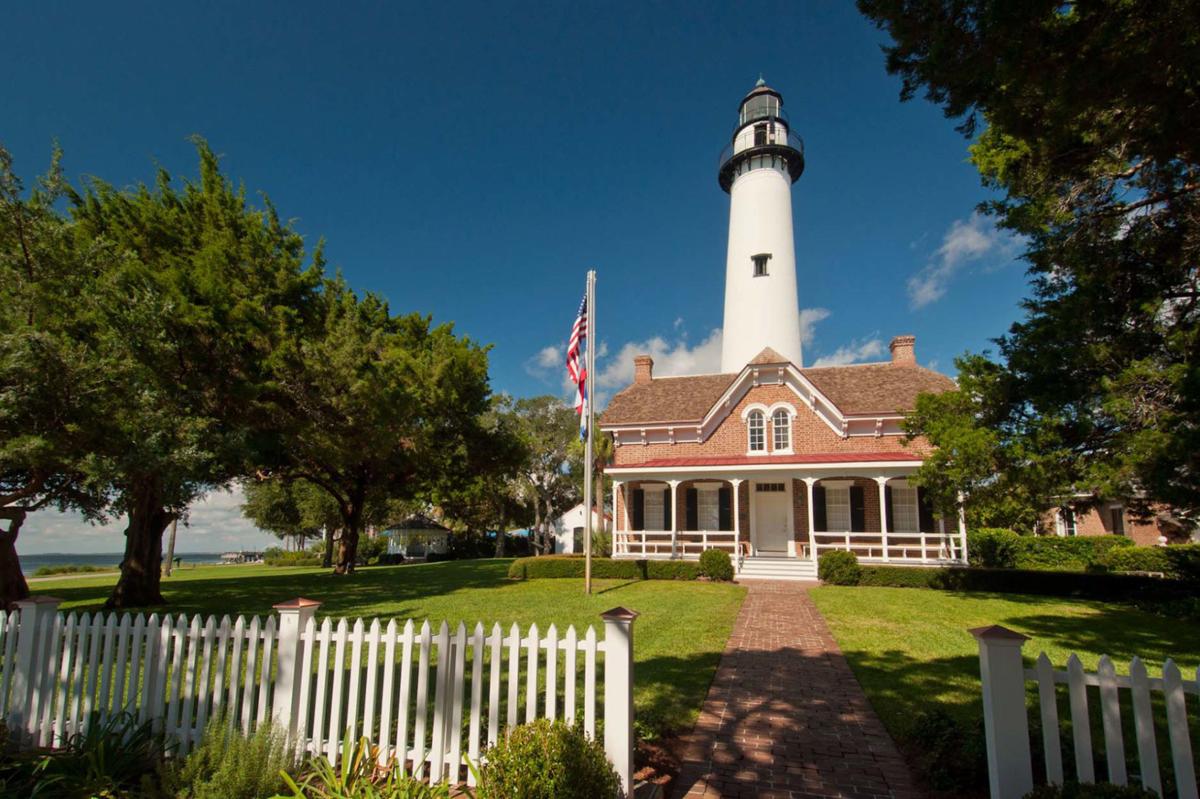 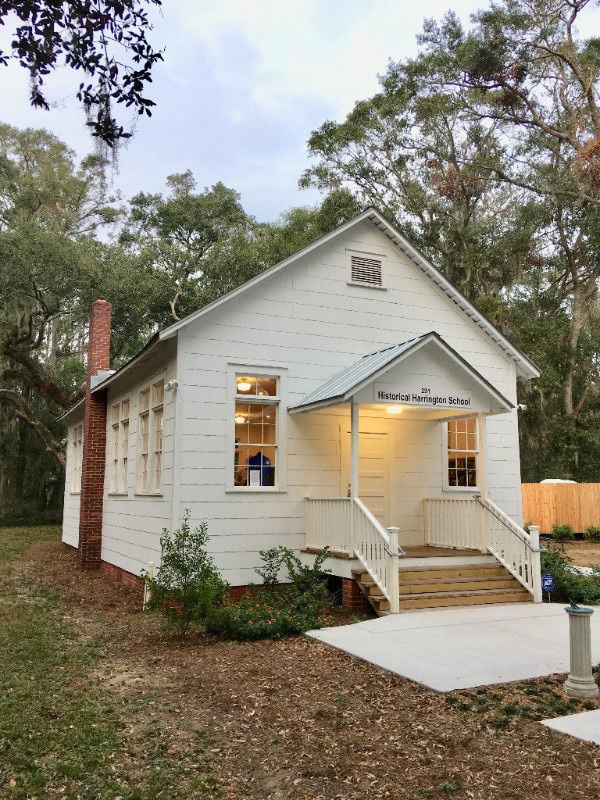 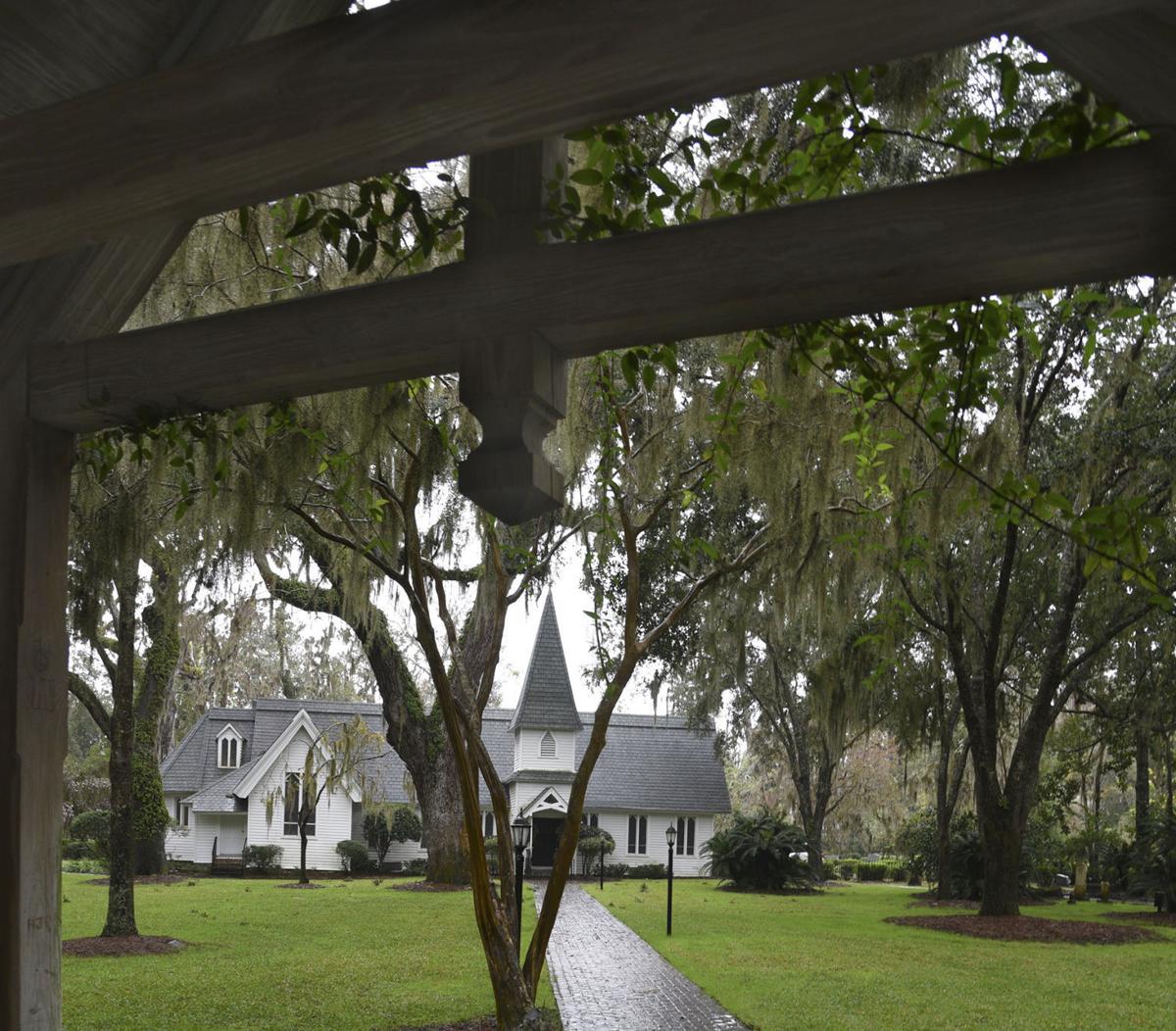 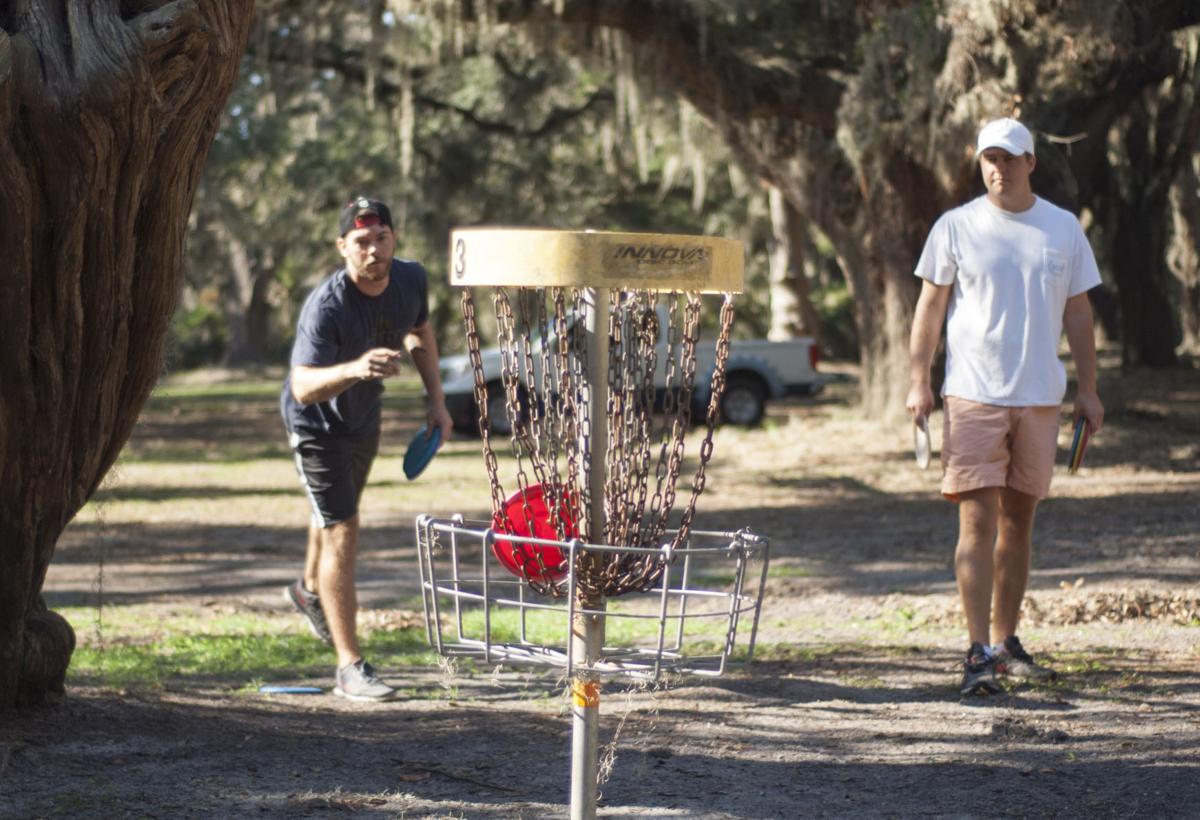 Disc golf is a popular pastime at Gascoigne Park, on St. Simons Island. 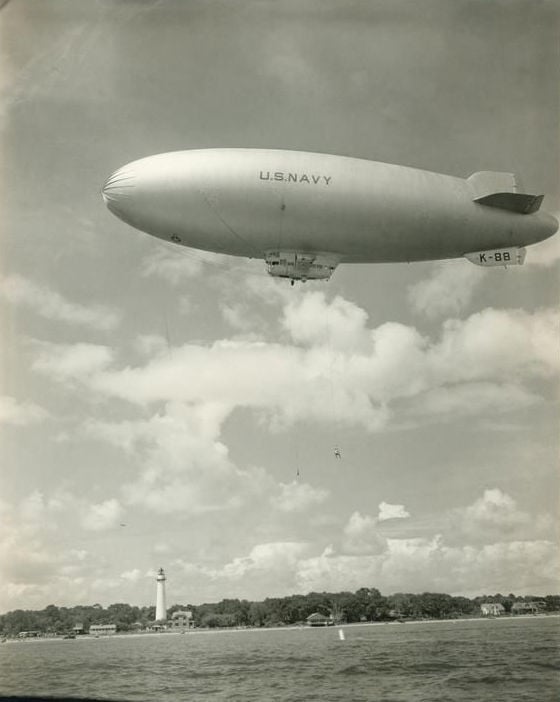 In this 1945 photo from the Glynn County Airport Commission website, a U.S. Navy blimp is seen flying over the St. Simons Sound. 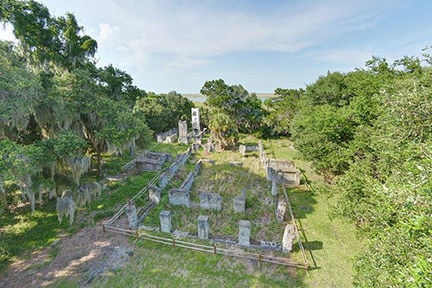 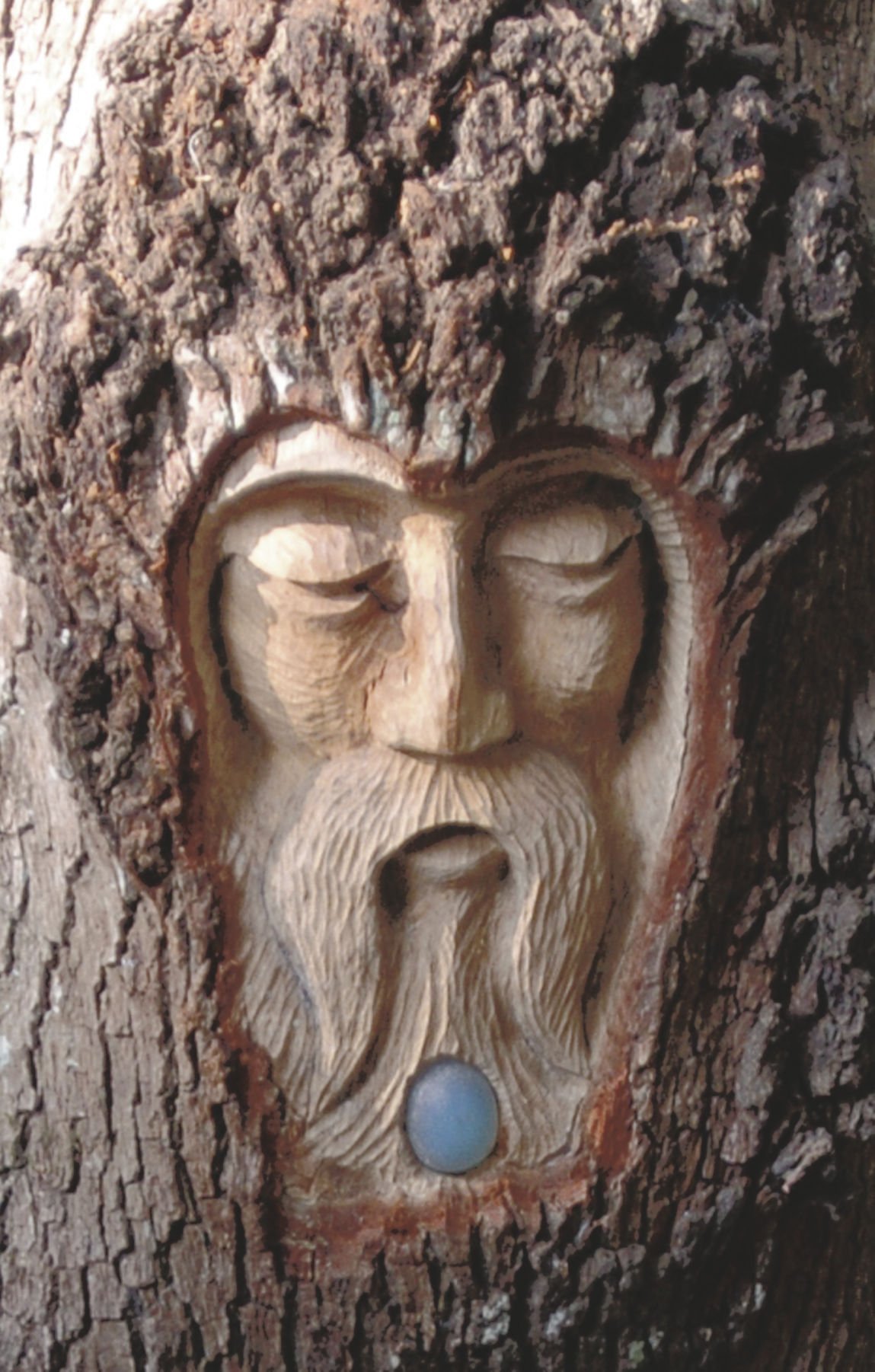 One of the many tree spirits carved by Keith Jennings, on St. Simons Island.

Disc golf is a popular pastime at Gascoigne Park, on St. Simons Island.

In this 1945 photo from the Glynn County Airport Commission website, a U.S. Navy blimp is seen flying over the St. Simons Sound.

One of the many tree spirits carved by Keith Jennings, on St. Simons Island.

Did you know that the Golden Isles are a treasure trove of interesting tidbits? With everyone staying at home right now, it’s a good time to get acquainted with some of the history, and quirkiness, of the community. We hope this piques your curiosity for more.

*Most of the enslaved people who worked the plantations on St. Simons Island were of Gullah-Geechee heritage, and many of their descendants still live in the area. Their patois, influenced still by African words, adds to the cultural richness of the area. The Gullah-Geechee trace their ancestry to the West African counties of Senegal, Gambia, Guinea and Sierra Leone. To learn more, visit ssiheritagecoalition.org

*I don’t think I’ll ever tire of the story of the sacrifices and dedication of Neptune Small, who was bonded to Retreat Plantation, and worked for the family of Thomas Butler King and Anna Matilda Page King. Small accompanied Capt. Henry Lord Page King during the Civil War until King’s death on Dec. 13, 1862, in the Battle of Fredericksburg. He brought Capt. King’s body back to his beloved St. Simons Island. He later accompanied R. Cuyler “Tip” King for the remainder of the Civil War. After the war, and emancipation, Small returned to work for the King family. He helped them rebuild, tended to the gardens, kept up the graveyard at Christ Church and helped plant the Avenue of Oaks that now leads to The Lodge at Sea Island, on St. Simons Island. The King family also gave Small land from their plantation that is now Neptune Park. Small lived more than 40 years as a free man, and died in 1907 at the age of 75. He is buried on the grounds of what was Retreat Plantation. See coastalgeorgiahistory.org.

*Who can resist a haunted lighthouse? The St. Simons Island  Lighthouse, adjacent to Neptune Park, has a well-documented history of ghost sightings, if you believe in those sorts of things. The current lighthouse was built in 1872, after Confederate forces destroyed the first one during the Civil War, so Union troops could not use its light for navigation. The original lighthouse was constructed in 1810 by James Gould, the first lighthouse keeper, but it was after that things got interesting. In 1880, Frederick Osborne was the lighthouse keeper. He and his assistant lived in the adjacent keeper’s cottage with their families – Osborne on the ground floor, and John Stephens and his family on the second. Osborne was accused of speaking inappropriately to Stephens’ wife, an argument ensued, and resulted in Stephens fatally shooting Osborne. It didn’t take long for reports of a lighthouse ghost to appear in newspapers nationwide.

*St. Simons Island is an archeological and natural wonderland, and the Fort Frederica National Historic Site and St. Simons Land Trust websites are sources for detailed information. History on the island dates back thousands of years, with evidence of Native Americans inhabiting the area as far back as 2,500 B.C. Subsequently, colonists arrived, followed by the Plantation era, the Civil War, Reconstruction, the Industrial Revolution, World Wars and the resort age. Visit nps.gov/fofr or sslt.org.

*Glynn County played a significant role in World War II, not the least of which was the construction of both Liberty ships and blimps for military use. Local shipyards were beehives of activity from 1943-1945, with 99 of these cargo vessels being constructed during that time. Little known fact: No names were inscribed on them to prevent enemy forces from determining the vessels’ missions, so they freely sailed the high seas laden with equipment and supplies. The height of the shipbuilding was December 1944. The Navy requested six ships to be completed that month, and the workers responded with a guarantee of seven. Over at NAS Glynco, blimps were housed in two enormous wooden hangars, and blimps from other bases received maintenance there. The eight-ship in-house fleet, Airship Patrol Squadron 15, was the principal unit based at NAS Glynco during World War II. Blimps, which were capable of sustained flight and electronic submarine detection, flew patrol missions, and provided escorts for convoys. NAS Glynco is now the site of FLETC and the Glynco Airport. For more info visit www.coastalgeorgiahistory.org/visit/world-war-ii-museum/

*What appears to be a tranquil, oak-filled park is the cover on an eons-old history book. First, Gascoigne Bluff was a Native American community, then a port. It has served as a naval base, the site of a Franciscan monastery, a plantation and a shipping point for lumber and timber. In fact, the USS Constitution, known as “Old Ironsides,” was constructed from oaks at Gascoigne Bluff.

*The Golden Isles have had a colorful history, and there is no greater proof than the fact that no less than five national flags have flown over the marshes of Glynn. The first was raised in 1526, when Lucas Vázquez de Ayllón arrived with 600 Spanish colonists to found the ill-fated settlement of San Miguel de Gualdape. Then, from 1562-1564, the French flag flew over our fair isles, courtesy of Jean Ribault, who had sought haven for French Huguenots. Ribault and his bunch were expelled by the Spanish, who retained rule until the early 1700s. In 1736, the British came and established Fort Frederica at the behest of their leader, Gen. James Oglethorpe. The Union Jack waved over the Golden Isles until 1776, when the first American flag was raised. The American flag was lowered in 1861, when the Confederate flag flew over Georgia, after our state seceded from the Union. The Confederate flag was taken down, when Union forces took the Georgia coast in 1862. Finally, the U.S. flag took its rightful place once again, and has graced us ever since.

*Christ Church, Frederica is built upon the site near where John and Charles Wesley, both Anglican priests and the founders of Methodism, preached, while they were in ministry at Frederica under Gen. James Oglethorpe. Between 1736-1766, the first religious services on the island were conducted by John Wesley, George Whitfield and others. Christ Church wasn’t founded until 1808, and there was no building until 1820, but its spiritual foundations were laid more than seven decades earlier.