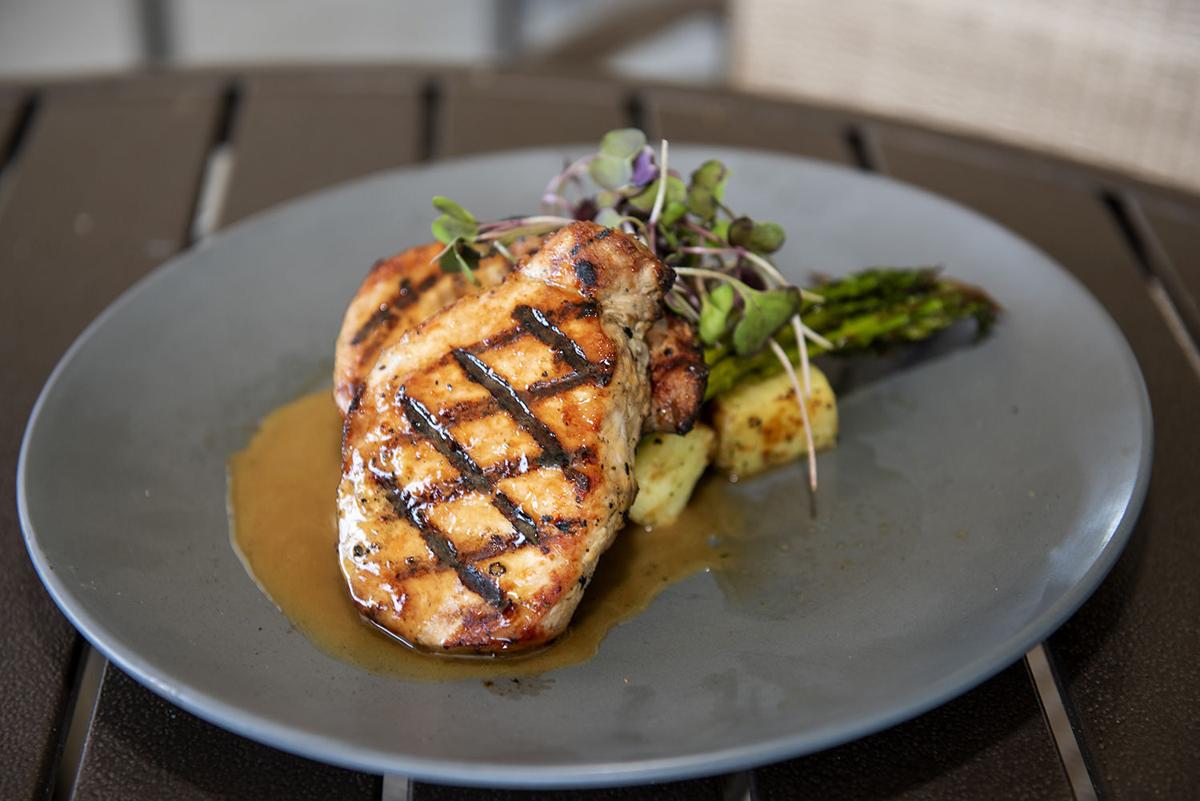 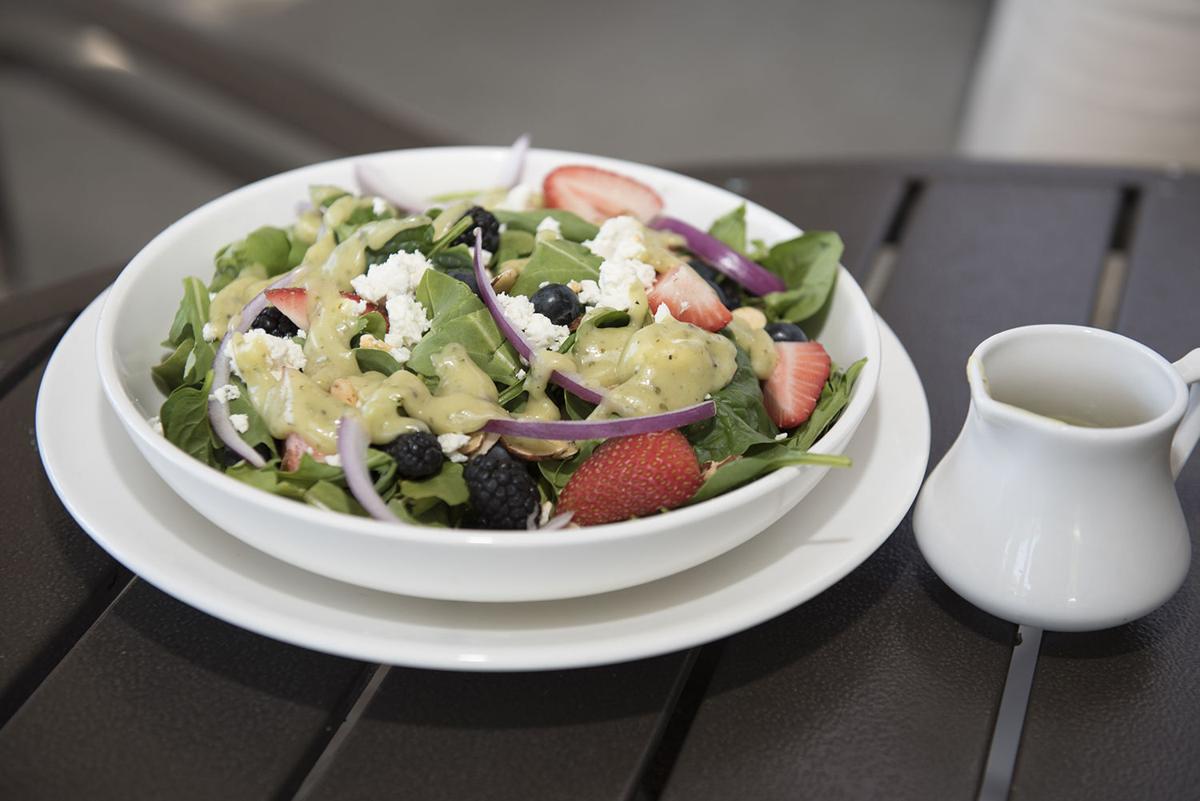 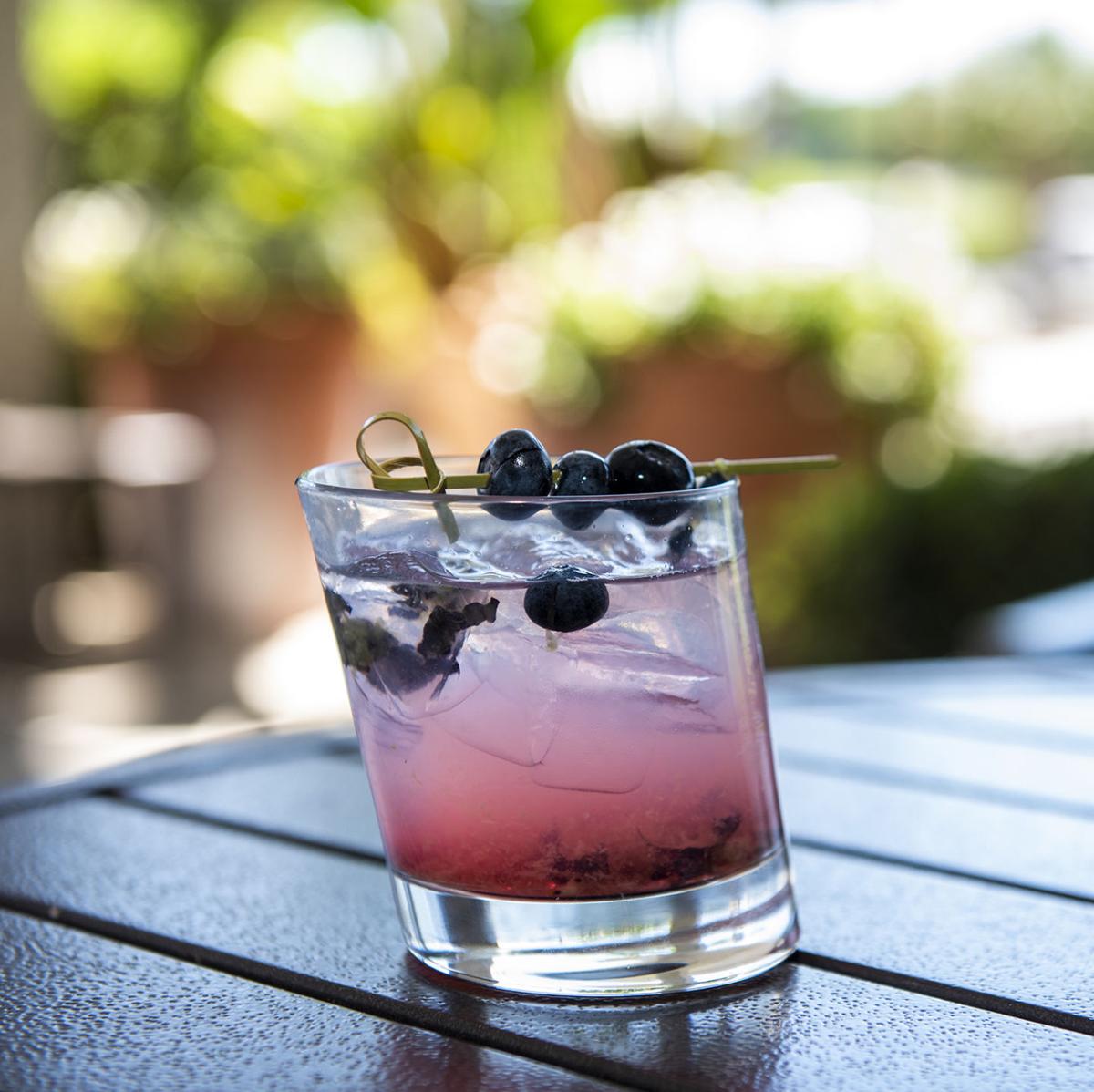 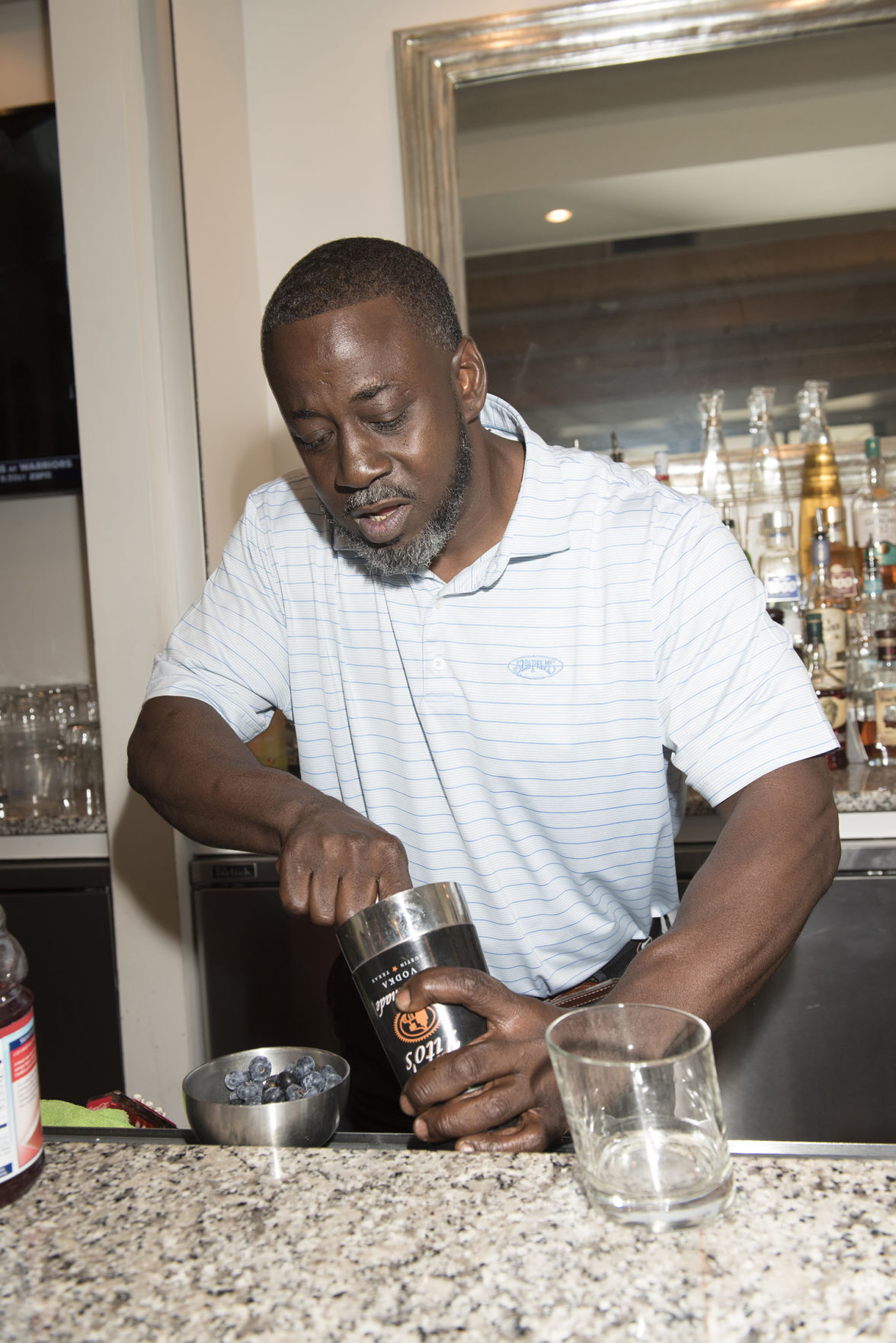 Bartender R.B. Brown, muddles blueberries for one of his signature cocktails. 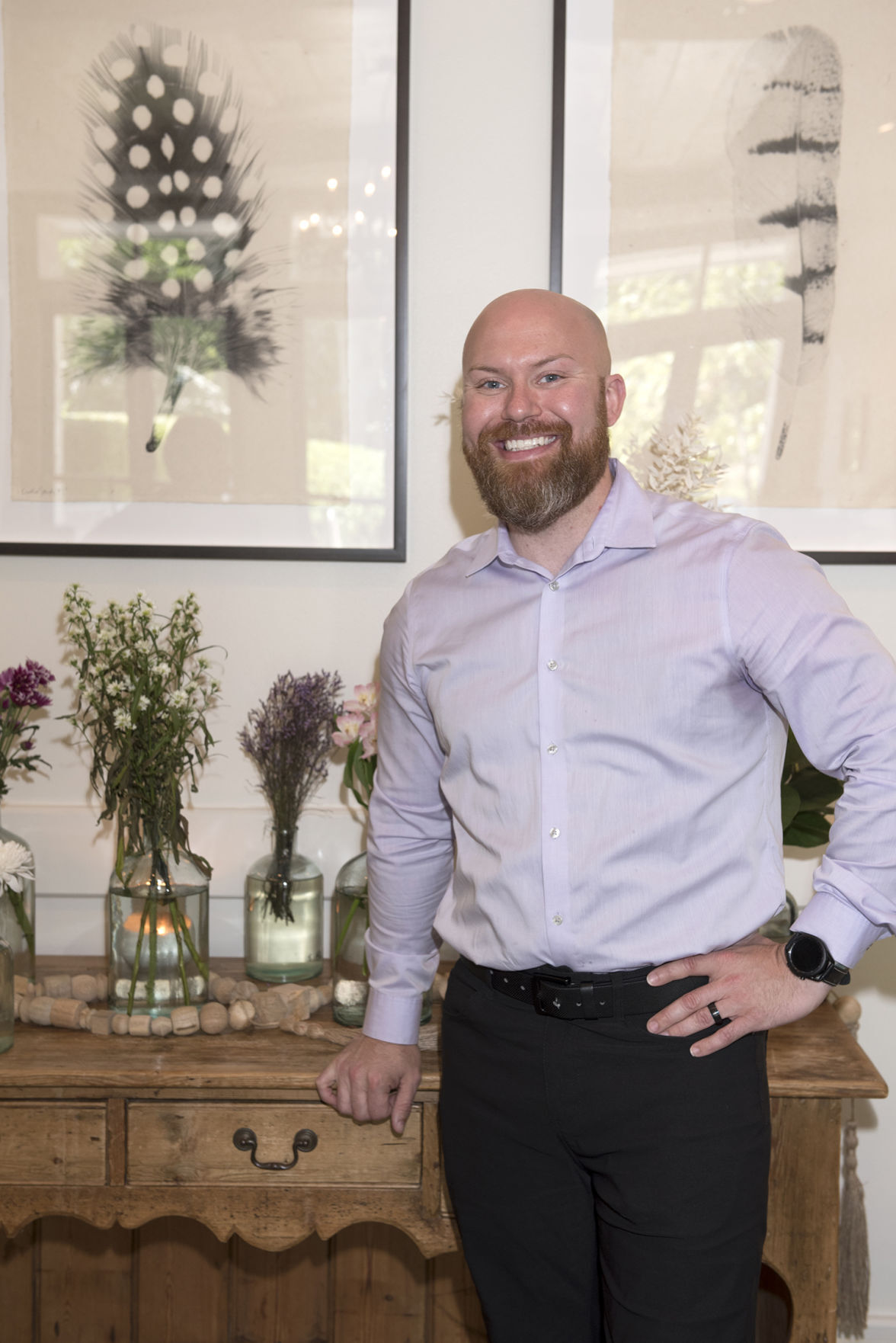 Benjamin Clark, director of food and beverage for SAGO at Sea Palms, uses natural materials and textures to create the right aesthetic ambiance. 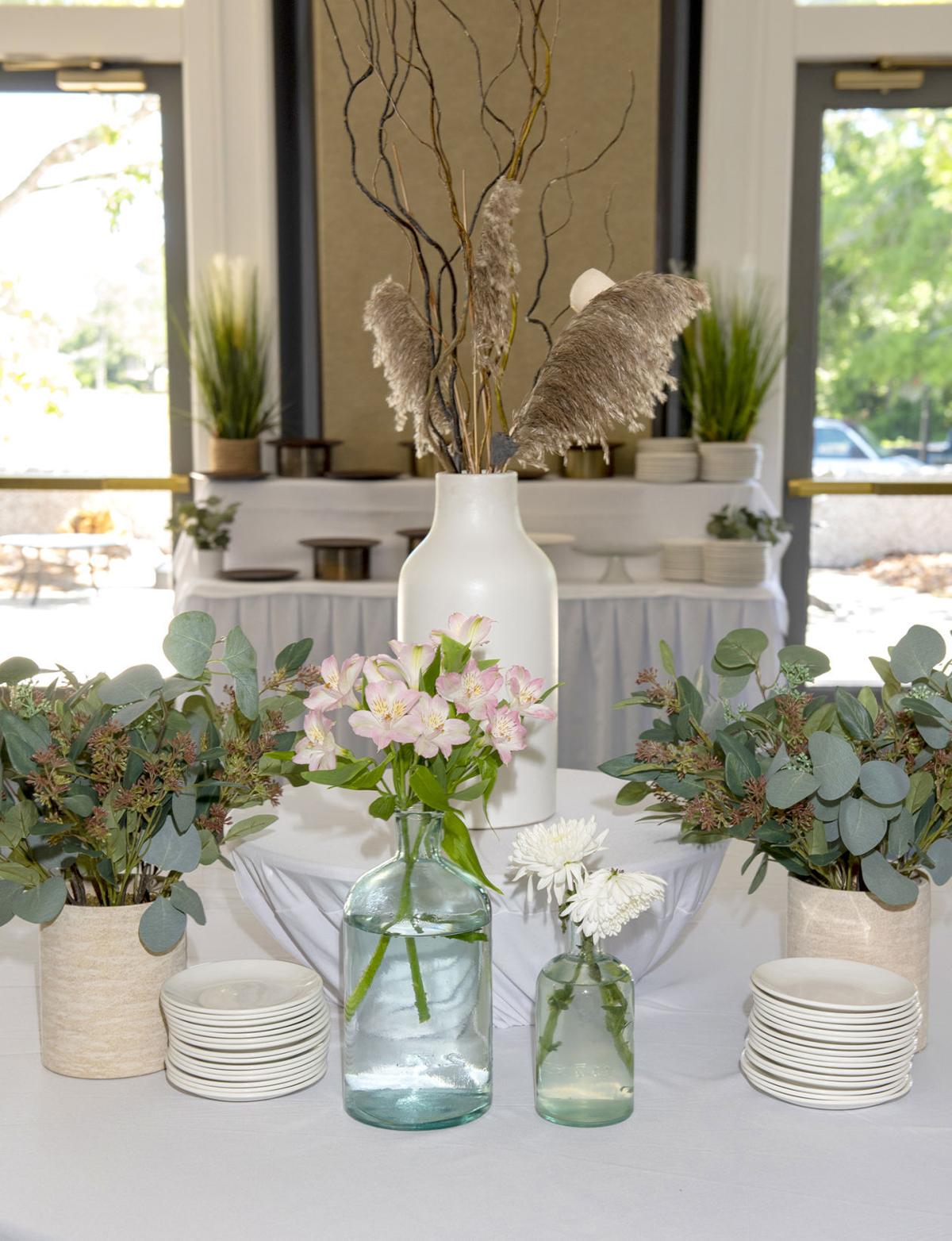 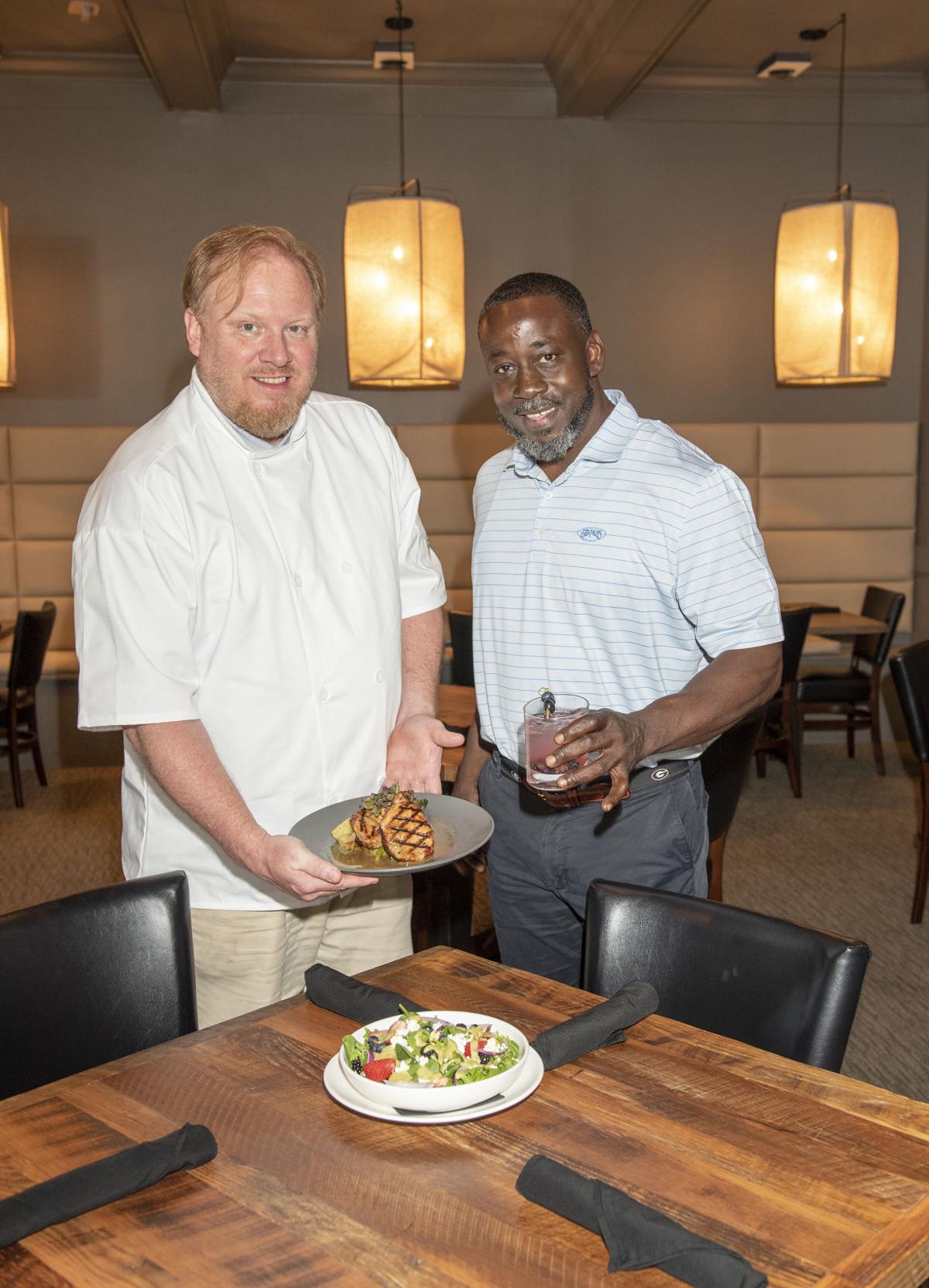 Bartender R.B. Brown, muddles blueberries for one of his signature cocktails.

Benjamin Clark, director of food and beverage for SAGO at Sea Palms, uses natural materials and textures to create the right aesthetic ambiance.

Enjoying a delicious meal, prepared with the freshest of ingredients and in beautiful surroundings, is one of life’s great pleasures. During the warm-weather months, flavors become lighter and brighter, and the option of dining al fresco is frequently chosen. We recently stopped by Sago at Sea Palms and spoke with Ben Hankey, executive chef, R.B. Brown, bartender, and Benjamin Clark, director of food and beverage, to get some inspiration for a delicious summer meal – from preparation to presentation.

We concentrated on the entrée, salad and cocktail because many people’s appetites are lighter during the longer summer days. In addition to the abundance of fresh, healthy ingredients, our examples are easy to prepare at home. Brown provided his signature cocktail recipe, and Hankey gave us his salad secrets. The recipes for the entrée and side dish are similar to what Hankey prepares, but his exact measurements, and some ingredients, remain a secret, so we have recipes for similar dishes. The secret to a successful meal, in addition to fresh ingredients, is to keep things simple and low-key. Then, you’re guaranteed to have an outstanding summer supper.

First things first, however. Creating the space for the food to be served and eaten, begins the process.

Delicious food should be served in a worthy manner. Clark, the food and beverage director, said that greenery, and flowers, especially spring buds, can elevate a room to a whole other level. The key is to be elegant, but incorporate as many natural materials and textures as possible.

Decorating a table goes far beyond hauling out a tablecloth and adding a vase of flowers as a focal point. In fact, making an effort to set a nice table adds an indescribable aesthetic to any meal, and gives a peak into the personality of the host.

“Burlap table coverings have become very popular,” Clark said. “They are warm. Candles, votives and bud vases, placed at various elevations on the table, add visual interest and create the right atmosphere for an enjoyable meal.

Once the table is set, meal preparation may commence.

For the cocktail, Brown suggests a riff on blueberry-lemonade with a bit of a kick. The mixture of muddled blueberries, blueberry vodka, lemonade and cranberry juice can be served singly, or in for parties, in a pitcher. Just adjust the amounts of ingredients to taste, keeping relatively the same ratio.

Muddling the berries (or any fruit or herb), he said, helps bring out their full flavor.

He also said not to forget to shake the mixture before pouring it over ice and adding the cranberry juice.

“It blends the textures and flavors,” he said.

Chef Ben Hankey is a familiar face around these parts. After years at working at various dining venues on Sea Island, he took over the executive chef position at Sago at Sea Palms just a couple of months ago.

Hankey has a passion for fresh, seasonal ingredients. His accessible meals are easy to replicate, but not duplicate, at home.

Currently, one of the salads he’s serving is a seasonal, arugula and spinach-based and topped with berries and other delicious ingredients. If you can’t follow the recipe to a “T,” Hankey says a number of substitutions can be made for the fruit, and goat cheese, which is less sharp than feta, can be substituted for the popular Greek cheese. Adjust amounts based on how many people are being served.

Hankey added that he tries to partner with as many local growers as possible. Another choice is to add and remove dishes from the menu at certain times of the year. After all, the freshest food is the food in season. And late spring and summer are certainly the freshest times of year.

And to the blueberries, add:

• Pour blueberry-lemonade over ice, in either and Old Fashioned or coupe glass.

• Add a splash of cranberry juice.

• Garnish with blueberries and enjoy.

Brine pork chops in a solution of sweet tea and salt in the refrigerator for 24 hours.

When ready to cook, drizzle olive oil in skillet and cook to desired doneness, making sure to reserve pan drippings.

Remove pork chops from skillet and place on serving tray.

For the pan gravy:

First, make a roux by mixing flour with pan drippings.

Add stock and whisk until combined.

Season to taste with salt and pepper.

• Dressing: A mixture of olive oil and either white, or

Place arugula and spinach in bowl, top with berries, onions and nuts. Drizzle with dressing. Serve on salad plates.

For the main course, nothing beats meat and potatoes, and Hankey has a light, but filling, meal.

Sweet-tea brined pork chops are the focus. He serves thepork chops with oven-roasted potatoes and asparagus, and we’ve included basic recipes for those two dishes, which will approximate those prepared at the restaurant by Hankey.

Break the ends off of the fresh asparagus and discard.

Roast vegetables for 20 minutes. Check the doneness of the potatoes and if necessary continue to roast for 2-5 minutes or until tender. Remove from oven and serve.